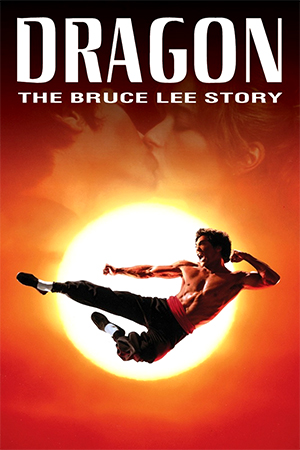 Director Rob Cohen gives Jason Scott Lee his shot at the big time in this epic story of Martial Arts legend Bruce Lee. Loosely based on the book ‘Bruce Lee: The Man Only I Knew’ by his wife Linda, the film highlights his life from the age of 6 in Hong Kong to his untimely death in 1973, soon after he completed ‘Enter the Dragon’. Ironically, years later his son Brandon was killed in an accident on the set of ‘The Crow’, 8 days before filming finished and shortly before ‘Dragon’ was released.

I am not going to go into great depth plot-wise, as I’m sure most of you already know the life of the legendary Bruce Lee. Basically though, the film kicks off with Bruce starting to learn Wing Chun at the age of 6, and then completely bypasses his involvement with the Cha Cha competition (presumably seen as more of a footnote than an important era). We now jump to 1959, which saw his immigration to America after he received police warnings over street gang fights. Working in San Francisco as a dishwasher in a Chinese restaurant, Bruce has relations with future wife Linda and 9 months later, they marry and so on…

If you’re hardcore Bruce Lee fan, you’ll instantly notice that ‘Dragon’ takes a number of liberties in terms of historical accuracy. One assumes that either Cohen or studio executives felt that the real events weren’t exciting enough, so several fabrications and exaggerations have been added to ‘beef’ things up. For example, the fictional challenger in the movie (played by John Cheung) attacks Bruce from behind to cause his spinal injury, whereas in real life this was just a case of excessive weightlifting. Similarly, the whole ‘mystical demon’ element stems from nothing more than a very standard Chinese custom and Lee was in fact an atheist.

Although it’s easy to pick holes in the story, ‘Dragon’ still emerges as a decent Hollywood blockbuster. Scott Lee makes for an impressive incarnation of Lee, with his gymnastics background coming in handy for the film’s many enjoyable action scenes. The romance between Lee and Linda is also handled fairly well, showing the ups and downs of their relationship without ever looking too deeply into some of the gossip that surrounded his real life. All in all, it’s a solid slice of entertainment that presents a charming if somewhat inaccurate account of Lee’s life.