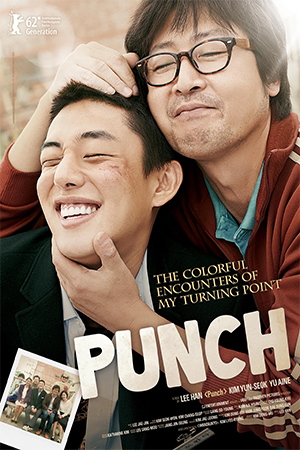 The by-no-means prolific Lee Han returns to the Korean screen with a sprightly, yet disjointed drama based on Kim Ryeo-Ryeong’s novel. Intensely packed with eccentric characters, off-kilter situations and underlying pathos, ‘Punch’ is as Korean in style as kimchi downed with a bottle of Soju.

Pessimistic student Won-Deuk lives with his partially disabled father and adopted uncle in a crowded city suburb with little on the horizon to get excited about. Won-Deuk’s nemesis – spiky school teacher and part-time activist Dong-Joo – lives a few doors away and so there seems to be no escape from the humiliation of school and the misery of life. Yet Dong-Joo, despite his flippant manner, cares about the teenager and keeps an eye on him while his father is away touring the country as a low-paid street entertainer. Won-Deuk resists this interference and literally prays for some higher power to do away with his meddlesome neighbour. Though divine intervention doesn’t remove Dong-Joo from the world it does seem to bring back a visitor to the area claiming to be Won-Deuk’s errant mother.

‘Punch’ starts strongly, meanders all over the place and ends optimistically. With its standard-issue (for Korean films) running time of two hours not helping centre its focus, ‘Punch’ is occasionally frustrating yet often fascinating film that tackles a number of social issues with skill. It touches on themes that do not usually figure in glossy Korean media such as poverty and, while never forceful with its message, conveys its ideals with success. The contemplation of immigration does verge on being needlessly didactic, but its heart is undoubtedly in the right place.

Though the excellent Yoo Ah-In is the epicentre of the film, Lee Han has packed the cast with a number of Korean actors who have elevated playing the oddball into something of an art form. Kim Yun-Seok is a perfect foil for our young protagonist, endearingly grumpy and irascible, while the archdeacon of kooky Korean actors, Kim Sang Ho, is a solid addition to the cast as the foul-mouthed neighbour who wails throughout the film. It’s the skill of such performers – along with stellar support from background actors like Jasmine Lee and Park Soo-Young – that makes ‘Punch’ as involving as it is.

As stated though, ‘Punch’ is hamstrung by its chronic lack of focus or intent. It verges on being episodic such is the fractured nature of the narrative and the 120 minutes that are lavished on it just compounds the problem. It is a pity to report this as ‘Punch’ often does so much right before going off in another direction with the concentration of a toddler on that cheap orange squash that is filled with supercharged food colourings and sweetners. Very nearly superb, very nearly maddening, ‘Punch’ verges on the former enough to be considered a recommended feature.