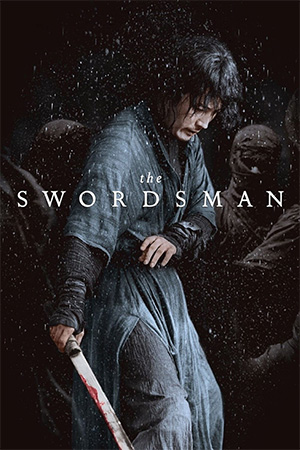 Despite some familiar genre tropes and a narrative that succumbs to the oft used hero-needing-to-take-up-arms-once-again-to-seek-revenge, ‘The Swordsman’ is nevertheless a breath of creative fresh air with some super charged fight action.

A renowned swordsman Tae-yul (Jang Hyuk) has been living the quiet live in the mountains ever since a coup against the King he was charged with protecting left him partially blind. Raising his young daughter, Tae-yul has given up the way of the blade to live a peaceful existence. But when his daughter is targeted by traffickers led by the dangerous Gurutai (Taslim) and political unrest once again rears it ugly head threatening his quiet existence, Tae-yul must take up the blade to protect what is his and face his dark past.

‘The Swordsman’ flies out the gate with a wicked scene of sword-fight action showing what happened to the young Tae-yul and how he came to have his sight afflicted. The pace then slows down somewhat as we zoom ahead years later to see an older Tae-yul living peacefully in the mountains. Proceedings then take on a slower vibe as we come to learn about and get to know the characters who will eventually all become entangled in one another lives. This is no detriment to the film as writer/director Choi Jae-Hoon wisely introduces the various characters and their scheming, letting us get to know them and raising the stakes for the action blow out of the second half. Choi Jae-Hoon drip feeds plot points and info regarding Tae-yul’s past (as well as the odd, sweet action beat!) meaning we are fully invested in his plight once the action ramps up.

Eschewing, for the most part, extensive wirework and CGI enhancement, ‘The Swordsman’ delivers clean, crisp, albeit brutal swordfight action. Jang Hyuk (‘Volcano High’) is a dynamo, utterly convincing as a near-blind sword master, who is even pretty badass with a cane before he picks up the blade! One particularly inventive sequence sees him take on a couple of deadly henchman, then a platoon of gun slinging soldiers, before then fighting a small army of ninjas! Yes, ninjas! ‘The Swordsman’ even finds time to feature that action movie favourite. Jang Hyuk is great as the Zatoichi like hero, and is backed up by Joe Taslim (‘The Raid’, ‘The Night Comes for Us’) as the big bad, who all but steals the film with his sneering, smarmy, long-haired, and utter despicable villain. He gives us a bad guy we love to hate, and it is another notable role to add to his already impressive CV.

It may miss the slick sheen of say a Zhang Yimou sword epic and others of its ilk, and while some of the tropes are well used and plot revelations hardly surprising, ‘The Swordsman’ is nevertheless a great period action flick that balances story and action well and delivers on its promise of thrilling swordplay.

Trinity CineAsia presents ‘The Swordsman’ on DVD & Digital from 17th May and Blu-ray from 24th May.