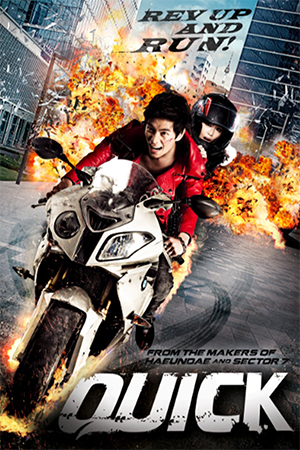 Gi-Soo (Lee Min-Ki) is the hot head leader of a motorcycle gang, who likes to go fast, look cool and has several women lusting after him. Hard life. In fact, he is such a hot head that when cruising around Seoul with his gang late one night he causes a massive pile up and the deaths of several innocent motorists. Flash forward six years later and he is now a lowly bike courier and not quite the cocky douche bag he used to be (though he still looks like a ridiculous poser in his leathers and boy band haircut!). No sooner has he finished one job he’s onto the next where he has to drive his ex-girlfriend (awkward!) to a publicity event. But no sooner has she placed the bike helmet on her head, Gi-Soo gets a phone call from an anonymous caller telling him if the helmet is removed it will blow up, if they are more than ten feet apart from one another they will blow up and if Gi-Soo doesn’t deliver the packages the mysterious caller has placed in the bike they will, well, you get the picture.

Basically a Korean remake of ‘Speed’, right down to the finale being set on a runaway train with the leading lady handcuffed with no chance of escape, this would-be Blockbuster is all kinds of insane silliness and tone varying madness but is actually a whole lot of over-the-top action fun. With it’s bubblegum visuals, broad (and I mean broad) comedy and breakneck pace, ‘Quick’ certainly lives up to its title. Everything is loud, fast and quite frankly absurd but due to the sheer momentum, slick visuals and the ever increasing amount of motorcycle mayhem, ‘Quick’ is never dull and once you get used to all the shouting and constant cheering/screaming is pretty darn entertaining. Mixing CGI with practical stunt work the action scenes are mounted with verve, feature many a painful looking stunt (which the end credits confirm in some Jackie Chan style outtakes) and come at frequent intervals. They also get more elaborate and just plain insane as the film progresses with Gi-Soo driving across and jumping between skyscrapers at one point.

‘Speed’ isn’t the only film ‘Quick’ heavily references with the action also paying reference to ‘Die Hard with a Vengeance’, Van Damme’s ‘Knock Off’ and in one elaborate scene pretty much just re-staging the big freeway chase scene from ‘The Island’. With a hero who was responsible for the death of a mother and child, a mad bomber killing people left right and centre and poor innocent drivers crashing and burning every time a chase erupts you’d think the film would have a somewhat serious tone. Nope, as while the bad guy is suitably menacing, ‘Quick’ is all about the laughs (as well as the stunts and explosions) with so much mugging and shrieking on show it will no doubt make the more serious film lover’s head explode. In fact, the tone is almost a character in itself with it switching from serious to comedy to action thrills and back to comedy all within the same scene. Plus, this is likely the only film you are gonna see that ends on a comedy bomb explosion right after all the characters lives have just been threatened by said bomb!

Slick, brash, a little distasteful on occasion but fast and fun, ‘Quick’ will no doubt give those who hate Blockbuster entertainment (and there seems to be a lot of you out there!) more to hate but if you can go with its simple action entertainment agenda: it’s a hoot.