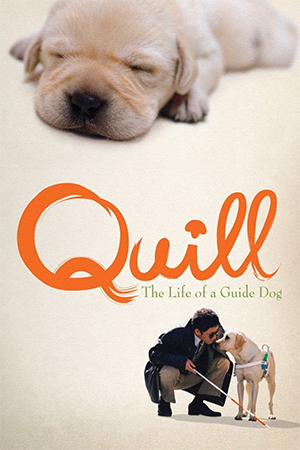 It can be easy to fall back on certain winning formulas in a bid to make a film stand out from the crowd. From throwing all manner of special effects at the screen to relying solely on ‘eye candy’, there are noted devices that the slothful director can utilise to entrance the viewer. ‘Quill’ could be accused of looking to the ‘ahhh factor’ – another popular staple for cinematic success – in its story of a puppy raised to be a guide dog. The difference with this delightful Japanese effort, and a lesson to all film-makers who use the aforementioned ways of affecting emotion in an audience, is that there is much more to ‘Quill’ than just a shallow facade.

Labrador Quill is chosen from among a brood of puppies to undergo training to become a guide dog. Starting with a year long course in human contact, Quill is gradually developed to be an invaluable tool for the visually impaired and his natural ability to obey commands makes him an early graduate from the school. His new client, the curmudgeonly Mr. Watanabe, is initially reticent about needing a guide dog and tries to remain independent despite the suggestions of those around him. After a few valuable hours with Quill though, Watanabe begins to rely on the dog and begrudgingly accepts his furry friend as a helper. Over the upcoming months the canine and the human bond with the latter introducing the former to his beloved wife and children.

There’s a lot to be said for a simple tale told well. The idea may have passed on into the realms of cliché, but Asian cinema still seems fully capable of taking basic ideas and injecting them with needed humanity. ‘Quill’ starts with a leisurely, almost faltering pace and comes worryingly close to appearing like a moderately interesting documentary. However, beyond the uneasiness of the first twenty minutes lies a very traditional story of friendship and reliance, closing with a few moments that draw a tear to the eye. To get such delicate emotions from such a potentially contrived scenario is testament to the execution of universal themes.

The use of a pooch protagonist to act as the narrative kernel is often used, but Yoichi Sai – working from the film’s literary source – also uses the human characters as transitory players in Quill’s life. The downside of this approach is the tendency to view the humans as mere cogs to advance the story. Nevertheless, the film uses Quill as its focal point and his subsequent friendship with Mr. Watanabe proves to be far more rewarding than any needless sub-plots or dramas. It is, therefore, a double-act and any unnecessary baggage is ignored by Sai.

‘Quill’ has the stripped-bare minimalism that delicately flavours much of Japanese cinema’s most cherished work. From sparring use of music to lingering photography, this is a film that dispenses with overwrought soundtracks or histrionics. Despite an unnecessary and slightly infantile voice-over, ‘Quill’ chooses its cinematic devices carefully even during the more heartfelt moments. The result is a film where the moments of silence or simple close-ups on the characters have as much impact as any heavy dramatics.

It may not appear to be a movie for everyone, but ‘Quill’ is a pleasingly crafted work that delivers on its simple premise. A laudable film with a mixture of the heart-warming and the heart-wrenching, ‘Quill’ is well worth 100 minutes of anyone’s time.