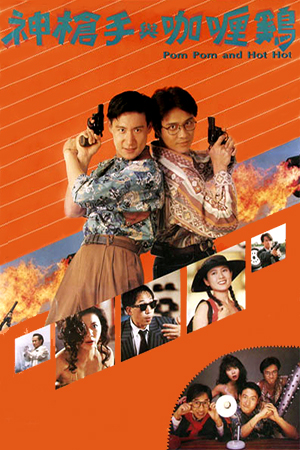 Within a Hong Kong film, the entire mood can be turned completely on its head in a split second. If ever there was a film to fully display this unusual trait, it’s ‘Pom Pom And Hot Hot’. Although, for the most part, this is an average comedy with brief scenes of action, the final fifteen minutes explode with an outrageous display of acrobatic gunplay. For this reason this has sometimes been linked to the popular ‘Curry And Pepper’ which also followed a similar pattern though to a far less extreme level.

Jacky Cheung and Tung Wai play two cops who are happy to deal with the normal cases that cross their path as long as it doesn’t disturb their lives too much. Their superior (Lam Ching Ying) is keen to show them the importance of the work they do and therefore involves them in a very dangerous case. After a very mysterious arms dealer arrives on the scene, local mob bosses are finding their number deleted bit by bit. This brings the duo into the investigation, though they soon realise that the enemy is far above the kind they’re used to dealing with. Family stresses then add to the pair’s burden as they are forced to look after an eccentric cousin during an impromptu visit and his pretty sister causes a stir as well.

‘Pom Pom And Hot Hot’ is a film where a fast forward button is a necessity. Too much of the film is bogged down in very tired routines that drastically slow down the pace. Never is this more in evidence than during the tiresome middle section which features more mahjong scenes than anyone can naturally stand. Thankfully the production is helped by a competent cast who inject a reasonable amount of enjoyment into the proceedings. The main strength of ‘Pom Pom And Hot Hot’ is the crime storyline and the appearance of the super-slick villain; if only the film had concentrated on this element it would undoubtedly have been a more cohesive whole rather than the mish-mash it is. Mostly watchable then, but in dire need of propping up in the middle.