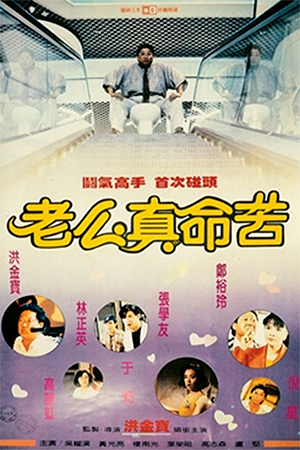 Although a hapless telephone salesman (Sammo) finds himself engaged in a selling war with a new saleswoman, this soon proves to be the least of his problems. After witnessing a feud between two hitmen and a local gang of triads, Sammo finds himself the target of the more neurotic and violent of the two hitmen (Cheung). Having survived various attempts on his life by the hitmen, Bat and Owl, Sammo also discovers that his wife’s policeman colleague has more than a professional interest in her. Taking a leaf out of Bat and Owl’s book, the jealous policeman also decides that Sammo would be better off dead. In one madcap night, all of these problems are solved with poor old Sammo naturally in the middle of it all.

Certainly not among the big man’s best, ‘Slickers Vs. Killers’ is nonetheless entertaining. The cast is packed with the usual gallery of stars that one associates with a Sammo production and of course the action (when it happens) is expertly choreographed by the man himself. Future wife Joyce Godenzi is slightly wasted here; although there is a brief hint of her action woman persona, this really doesn’t compare with her performances in ‘Licence To Steal’ and ‘She Shoots Straight’. If you’re looking for an undemanding 90 minutes, you could do a lot worse than ‘Slickers Vs. Killers’. However, don’t expect ‘Pedicab Driver’!