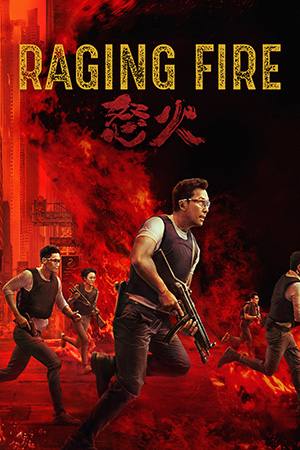 Donnie Yen and Nicholas Tse reunite (after ‘Dragon Tiger Gate’ and ‘Bodyguards and Assassins’) for Benny Chan’s (unfortunately) final film: and they all bring their A-game. Yen is Bong a no-nonsense super-cop who turns down a lucrative offer from some of the city’s most powerful people to turn the other way in an important case. As a result, Bong and his team are left out of a raid to bring down a formidable criminal. Said raid goes south leaving eight cops dead, the raid hijacked by a deadly new gang of criminals led by the vicious Ngo (Tse). Bong swears revenge on the gang but soon realises Ngo and his crew hit closer to home and are deadlier, and more organised, than your standard gang of would-be thugs.

One of Hong Kong’s best directors, Benny Chan has been producing wide-ranging blockbusters for several decades before his unfortunate passing from cancer in 2020. From the likes of ‘A Moment of Romance’, to ‘Who Am I?’, to ‘Invisible Target’, to ‘Call of Heroes’, Chan made blockbuster action with heart. ‘Raging Fire’ is up there with his best, buoyed by his two leading men giving fierce performances. While it features a big budget and Chan’s notable big action, ‘Raging Fire’ is as much a dark and serious revenge thriller as it is a massive action film. The big set-pieces that are splashed all over the trailers are present but Chan grounds them in a thriller plot that takes its time to develop the characters and give reason to their course of action. This means there is downtime between the big action, giving the stars ample opportunity to flex their acting muscles as well as their action ones.

Yen gives it his all as the super-cop out for justice and while he still gets his fair share of cool posing and inspiring monologuing, he downplays it a little here giving his character an emotional edge rather than just being a super-duper-super-cop. Yet it’s Tse who steals the flick as the relentless and possibly unhinged leader of a group of crims who use their tactical skills to wreak havoc. He chews scenery on occasion but keeps it together to portray a villain who is unstoppable in his quest for vengeance thus proving a deadly adversary for the film’s hero. The two stars seem to be relishing their roles here and keep the film thrilling with a serious tone, even when it threatens to push credibility on occasion, and their one-on-one fight is well worth the wait.

Chan also delivers the spectacle in a series of exhilarating set-pieces that benefit from the action skills of likes of Yen, Yu Kang, Kenji Tanigaki, Ku Huen-Chiu and Chris Collins. A fight-come-chase through a cramp shanty town and into and through the sewer below is a particular highlight that features sharp choreography to deliver high impact combat. A large running gun battle and the aforementioned Yen vs Tse showdown are also impressive and it’s only a chase mid-way through that opts for some CGI enhanced stunts and briefly turning Yen’s character into an untouchable superhero that jars slightly. Otherwise, Chan and his team have delivered one of the best action films of the year.

A bit of ‘Heat’ mixed with Chan’s own ‘Invisible Target’, ‘Raging Fire’ hits hard in both the action and drama, the much-missed director delivering one of his finest.