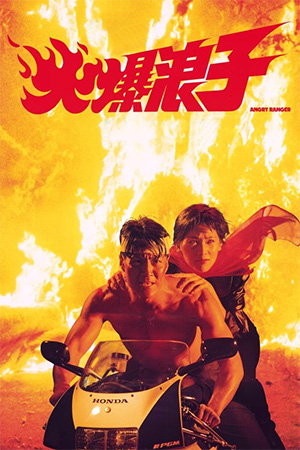 For as long as I remember, ‘Angry Ranger’ has been a film that is held in very high esteem by the fan community but was notoriously hard to actually get a hold of. However, the introduction of DVD saw a number of Hong Kong’s “lost” films finally make their way onto the easily importable format, including the highly sought after ‘Angry Ranger’. After all the praise and anticipation though, was it really worth the wait?

When Peter (Ben Lam) is released from prison, he promises his sister that he will start a new life and takes a job working on the family fish stall. Unfortunately though, the city around him has changed quite a bit and it seems like gangsters are lurking on just about every corner. Whilst Peter struggles to control the urge to use his fists, things start to look up when he meets and falls in love with Jane. Of course, nothing in life is ever that simple and when it turns out that Jane is already the girlfriend of the biggest gangster in town, all hell breaks loose and Peter is about to find out that sometimes confrontation just can’t be avoided.

Considering all the hype that surrounds it, ‘Angry Ranger’ is a surprisingly mediocre Hong Kong gangster flick that contains very little to make it stand out from the crowd. Yes, there is a refreshing new face in the lead and a healthy helping of action, but it’s the increasingly frustrating and often downright silly story that really holds it back. The main issue lies with the pivotal character of Peter who seems intent on bulldozing his way through the film with a total disregard for the safety of others. Time and time again, he annoys the gangsters to the point where they take revenge on his family and friends, leaving the audience wondering just how anyone could be so utterly stupid and selfish. Although I appreciate the overall intention was to prove that one man can take a stand, the execution is ultimately just far too repetitive to retain any realism.

According to the majority of fans though, the real selling point for ‘Angry Ranger’ is the action as it was choreographed by the infamous Jackie Chan Stuntgroup (Sing Ga Ban). Unfortunately though, it has to be said that this is far from their finest hour and the majority of bouts seem to lack any truly inspiring combinations. It’s a shame really, as Lam appears to be quite a capable fighter and the familiar flips and falls are always well executed, but aside from one old school style face-off (which isn’t even the finale) most of them fail to leave a lasting impression.

While it is far from being a bad film, ‘Angry Ranger’ is just too average and uninspiring to be worthy of all the acclaim it has garnered. I’m sure fans of 80s Hong Kong cinema will still feel a few nostalgic pangs during its duration, but there is no way that this will ever be able to sit amongst the true heavyweights from the golden era.