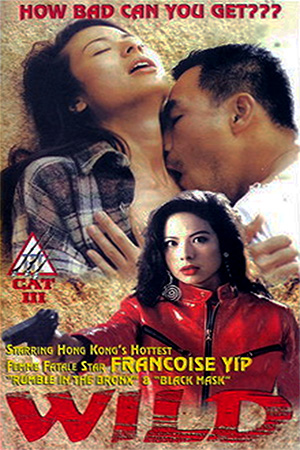 A somewhat toned down and muted effort from Category III bad boy Billy Tang, that is nevertheless still soaked in nihilism. A relatively straightforward tale of a guy (Lam) and a girl (Yip) who hook up and go on a violent journey of robbing and killing. With a couple of friends in tow, the two show no mercy towards whoever they encounter their growing infatuation with one another reaching fever pitch. Meaning it isn’t long before their passionate and violent tendencies get out of control.

Now ‘Wild’ is very much a film about style and being caught up in the moment rather than complexities and really exploring the damaged psyches of the troubled couple. This is not a bad thing as the melodrama is thankfully played down which makes ‘Wild’ a stylish and nihilistic thriller. The film is not as extreme at it may first appear and nowhere near as much as Tang’s more infamous offerings ‘Red to Kill’ and ‘Run to Kill’. There is still a smattering of violence and two rather raunchy sex scenes earning it a Category III rating but otherwise ‘Wild’ is much more about the intensity between Lam and Yip. An intensity that reaches an inevitable down beat and violent climax.

Lam and Yip are both very good and share intense chemistry. You believe they are infatuated with one another even if proceedings do become a little over-the-top. In addition, the film is stylishly shot with great use of orange and blue filters and with a tight pace the film moves along at a tense speed as the couple and their cohorts take more desperate measures to score big. There’s a little action thrown in towards the end and the film reaches a satisfying conclusion in quick time.

It may be a little tame for serious Category III fans and it does border on pretension on several occasions but overall, ‘Wild’ is an engaging, offbeat thriller about a narcissistically doomed couple living on the edge.