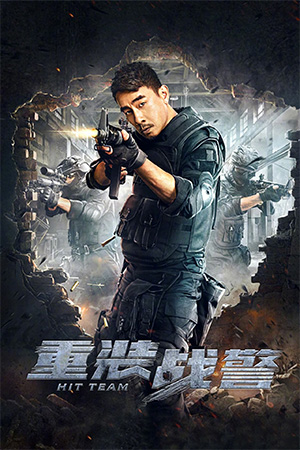 An elite police unit investigating a notable Hong Kong crime family is unaware of the machinations that are occurring behind the scenes as the untrustworthy son vies to take over from his father. Yet the beautiful and sophisticated daughter is the real danger in the family, and when her father dies, she manages to inveigle her associates and the law enforcers into thinking she is an innocent caught up in the underworld. While the head of the team (Jordan Chan) is suspicious of this new threat, freeing himself from her seductive grasp might be easier said than done.

Penned by prolific director and writer Wong Jing, ‘Hit Team’ is a formulaic cop thriller done on a low budget, something that makes itself very apparent early on. In fact, the biggest surprise about ‘Hit Team’ is seeing Wong Jing – a name usually associated with bigger productions – connected to what, at times, seems like a straight to television effort. Not that there is anything inherently wrong with that or any virtue in Wong Jing’s glitzier productions (‘From Vegas to Macau III’ anyone?), but when the budget becomes so noticeable that it’s a distraction, a problem is presented. Older Hong Kong films managed on much tighter budgets but knew their limitations; ‘Hit Team’ is a television movie with delusions of grandeur.

The main effect of the restricted finance is that attempts to show a big criminal network look woefully inadequate. There are a few neatly organised action set pieces, namely hand-to-hand scenes featuring a surprisingly able Jordan Chan (who I never really had pegged as an action star these days) and a typically photogenic cast, but it all seems underwhelming. It is very short though – barely over an hour – so Wong Jing, as a writer at least, has learned the value of brevity.