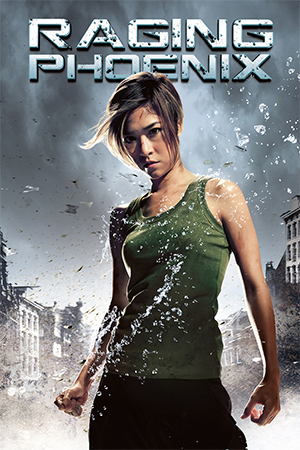 Cute, little, hard-as-nails Jeeja Yanin burst onto the scene with the awesome and underrated ‘Chocolate’. Managing to balance an effective performance as an autistic young woman while performing incredible bouts of martial arts action, Jeeja Yanin proved she was much than just the female Tony Jaa. Her sophomore effort may be light on plot and a little frivolous in the character department but it’s nothing short of a stellar fight film, a shit ton of fun and quite frankly one of the best female fighting films to come along in an age.

Produced by the same team behind ‘Chocolate’ and the ‘Ong Bak’ films, ‘Raging Phoenix’ gets down to business quick and rarely let’s up. Reminiscent of martial arts films of bygone days, ‘Raging Phoenix’ takes a ludicrous concept (street gangs kidnapping young women to farm them for their pheromones to produce a perfume that makes people addicted to sex!), spins in some astonishing displays of crazy martial arts action (B-boy break-dance moves mixed with what seems to be Drunken Thai Boxing) and weaves a tale that starts off fun (lots of comedy hi-jinks with the drunken style boxing) before taking a more serious tone come the second half (the rescue of a character’s wife and some incredibly brutal one-on-one fighting) and caps it off with the quite possibly the most impressive, not to mention violent, female vs. female showdown seen in martial arts cinema for some time.

Despite the slick visual look, kooky set up and a little too much reliance on wirework and CGI enhancement come the last third, ‘Raging Phoenix’ is really what we loved about the fight flicks from Hong Kong’s golden age: minimal story, over-the-top characters, fast pacing and heaps of beautifully choreographed fight scenes. The action scenes are a delight to behold and ‘Raging Phoenix’ is stuffed with them. Skilfully choreographed, playful, brutal and pushing the actors/athletes to their physical limits, the fights scenes in ‘Raging Phoenix’ are up there with the best. They kick off more fun and lightweight incorporating as much comedy as they do hard edged dust ups. The opening fight incorporates the crazy idea of fighters on what seem to be pogo sticks but it all works well thanks to how well shot and choreographed the scene is. Likewise, the next fight where Jeeja first meets the gang of fighters she eventually hooks up with has as many gags as it does skilfully choreographed take downs and techniques. The gag of Jeeja with a chair stuck to her behind (!) while using it to defend off bad guys is a hoot and a perfectly blended example of comedy and kung fu. Combing the techniques of kung fu, break dancing and fighting while drunk may seem ridiculous, and there is no doubt this is “movie fighting,” but it gives the fight scenes a kinetic and creative charge that will having you guffawing, cheering and amazed all at the same time. The best example: Jeeja’s first fight when drunk, as she kicks butt and busts some awesome dance moves.

And this is definitely Jeeja’s film. Despite being supported by a group of likeable and equally talented performers and fighters (who all get their chance to shine), it’s Jeeja who is the soul of the film. She may be cute, small of frame and shout a little too much but she is a fighting dynamo in the action scenes. Going from fun to gritty with apparent ease she also ups the emotional stakes of the film as she fights for the lives of her friends in several bouts of martial arts action where you feel every emotionally charged punch, kick and elbow to the head. Its great seeing a female get to cut loose like the boys and, to this reviewer at least, she can stand up there with the likes of Tony Jaa as one of the best action stars out there right now. She might not have to stretch her acting chops as much here as she did in Chocolate but it’s great to see her in a fun film that is proud to be a relatively lightweight romp with lots of kick ass action.

Hardened critics and martial arts fans will no doubt pick it apart for all its ludicrous aspects and yes there is a little too much reliance on wirework; not least in a very OTT sequence set on two rope bridges, but for the most part ‘Raging Phoenix’ is a hugely fun martial arts romp. A pleasant surprise indeed.