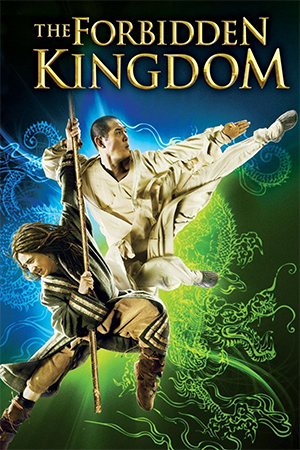 To be fair we couldn’t really have expected much more (at least not from Hollywood) with the two kung fu titans teaming up so late on in their careers and both pushing on into the twilight years of their lives. If this had been made ten or fifteen years ago when the two were at the top of their game, then this team up may have caused more of a fuss and kicked many more mountains of butt. As it is, ‘The Forbidden Kingdom’ aims squarely for fun and for the most part succeeds. A kung fu obsessed American kid (Angarano) is sent back in time thanks to a magical staff and learns real kung fu from Drunken Master Chan and noble but tough monk, Li. They all then set out to return order to the land which is in the evil grip of nasty, bearded warlord Collin Chou. About as textbook as it comes, the plot offers little new and not much to chew on between the fight scenes.

Still, director Rob Minkoff and cinematographer Peter Pau shoot the movie in lavish stile, a vibrant colour scheme bringing ancient China to vivid life. There is a simple but enjoyable sense of fun about the film which has been missing from a lot of recent blockbusters and the cast certainly seem to be having fun despite knowing the whole thing is a load of barmy nonsense. Chan especially seems to be having fun, a feeling that has been missing from most of his recent, and especially Hollywood, output. Most surprisingly is the amount of expertly staged fight and action scenes. Hollywood often opts to cut down lengthy Hong Kong fights and ruin them with hyper editing to supposedly make them look better. However, ‘The Forbidden Kingdom’ has a fair amount of well sustained and intricate fight scenes that often tip into brutal territory. Well, brutal for a family film at least. Famed Hong Kong fight maestro Yuen Woo Ping (‘Crouching Tiger Hidden Dragon’) coordinates some impressive battles that despite featuring a fair amount of wirework and dreaded CGI, still impress with the actual martial arts and boot work on display. Li and Chou get to go toe to toe several times and despite his aging years, Li is still incredibly nimble and sprightly.

But the main reason to see the flick is the fight between the two masters, Chan and Li. They may only fight once and it may not have been what it could have been if they had fought ten years ago (and in a Hong Kong movie) but it is still impressive, remarkably sustained and reason enough to watch the film alone for. ‘Kiss of the Dragon’ and ‘Unleashed’ are still Li’s best western films whereas ‘The Forbidden Kingdom’ is actually one of Chan’s best, the likes of ‘The Tuxedo’, ‘Shanghai Knights’ and ‘The Medallion’ ruining a lot of what was great about Chan’s films. Good looking fun that will neither go down as a true great or an awful dud but an enjoyable Hollywood styled martial arts adventure.