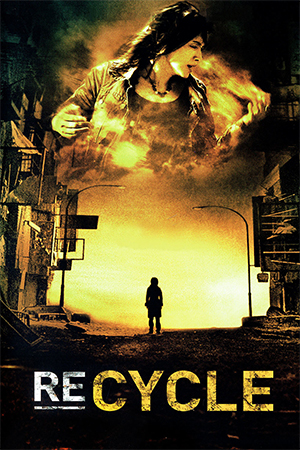 The Pang Brothers supernatural odyssey, ‘Re-cycle’, is a visual feast that is one part creepy horror and one part through-the-looking-glass surreal fantasy that features all the impressive ocular opulence associated with the directing duo (probably best known for ‘The Eye’ franchise) but unfortunately lacks a convincing emotional core to really sell its flights of fancy. Ting-Yin (Lee) is a successful novelist, with her trio of hit romantic novels about to be turned into a movie, but is facing a serious case of writers block for her newly announced novel, The Recycle. Deciding to focus on the supernatural world of ghosts, Ting-Yin sequesters herself away in her apartment desperately trying to work out the story. But when she begins seeing an actual ghost in her apartment fiction begins to blur into reality and Ting-Yin finds herself literally venturing into a supernatural fantasy world as her writing and creations begin to consume her.

Beginning proceedings in the spooky ghost sense akin to ‘The Eye’ (ghostly figures briefly seen as the camera pans a room, long haired ghost girls) before doing a complete 180 on the viewer and thrusting the main character into a fantasy world bursting with imaginative and eye-popping creations and environments, ‘Re-cycle’ is guaranteed to frustrate and amaze in equal measure. Those looking for a straight-up horror/ghost story (which the first half an hour seems to promise) will probably be disappointed by the tonal shift but those looking for something different and fans of the Pang Brothers stretching their creative and visual muscles will be in for a treat. While the first part of the film is very reminiscent of ‘The Eye’ films, the Pang Brothers are experts at the ghostly scares and construct some impressive jolts before allowing their imagination to let rip when Ting-Yin enters her fictional fantasy world. Forests of corpses, wastelands of giant discarded toys, hordes of zombies and something which can only be described as the embryo tunnel (!) are all magnificently rendered with the rather impressive use of CGI. Part ‘Silent Hill’ and part ‘Spirited Away’, ‘Re-cycle’ is often visually spectacular and the visuals often help to illustrate both the protagonist’s creative imagination and fragile state of mind.

Unfortunately, themes of loneliness, abandonment and reincarnation get somewhat lost in the entire spectacle as the narrative seems to rush our heroine from one set-piece and CGI enhanced world to the next in a hurried and unconnected manner. Despite’s Angelica Lee’s best efforts her author character often seems disconnected from what is happening around her, seeming to just be running away from or around CGI creations. This means the big revelation come the denouncement doesn’t quite have the emotional punch it needs and may cause some viewers to scratch their heads in bewilderment. However, there is quite a lot going on in ‘Re-cycle’ for both the eye and mind and while its perhaps a bit too ambiguous for its own good it’s probably a film best viewed a couple or several times to fully appreciate and digest. What it is however is inventive, for the most part entertaining and another showcase for the talents of the Pang Brothers.