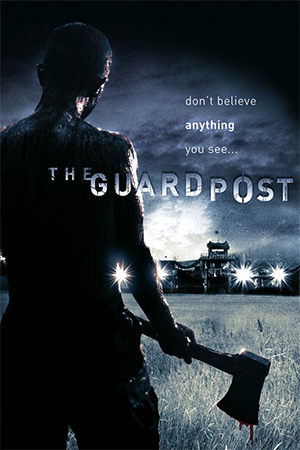 Kong Su-chang’s first directorial offering was the decent, if a little too lethargic, ghost thriller ‘R-Point’. His follow up, ‘The Guard Post’, treads similar territory as once again it deals with an army unit stuck at a remote outpost dealing with mysterious goings on and fighting for their lives against an unseen enemy. However, ‘The Guard Post’ is a much more successful film than ‘R-Point’, in style, pacing, tension and acting, and a very satisfying and creepy slice of Korean ghostly horror.

G.P. 506 (the guard post of the title) is an isolated army outpost where a team serves a three month sentence operating and maintaining the post. When communication is lost with G.P. 506 a second unit is sent in to find out what has happened. What they discover is a massacred unit with only two surviving members, one covered in blood and brandishing an axe. Alarmed that this news may get out, the army gives the new unit one night to try and figure out what happened before torching the place come sunrise. But will they discover the ghastly truth or fall victim to the same fate as the previous set of soldiers?

On first glance, ‘The Guard Post’ may not look like the most original piece of horror (soldiers picked off by an unseen force in an isolated compound) but it’s all in the execution, solid acting and taught direction that makes the film a cut above the rest. Despite the similarities to ‘R-Point’ (this film could work as a companion piece to it) writer and director Kong Su-chang has crafted a dark and riveting chiller that jettisons all the problems of his previous film. It may run at two hours long and the first hour is a slow build up but the film never feels like it drags, the pacing for this kind of adult horror story, spot on. A thick gothic atmosphere is evoked; an impending sense of doom ever present meaning the tension is always building and often erupts in a startling display of violence. The film is violent but never overly gory and Kong Su-chang bucks the trend of cramming in as much gore as possible, instead using it sparingly and therefore more effectively. When the violence and horror does erupt, it is more memorable and has lasting impact as it comes out of the situation and character and tension has been built and sustained beforehand.

The flashback structure used to show what happened to the previous unit and how it parallels to the present unit is a little confusing at first but once it gets going, is a novel way to show how the two teams dealt/are dealing with the horrific situation they have found themselves in. This also gives the film a fair share of characters who don’t always take the expected horror movie course and it’s certainly refreshing that it’s not just another bunch of annoying, loud mouth teenagers getting offed. In fact, ‘The Guard Post’ brings a serious and adult approach to its horror subject but is never too po-faced about proceedings and still delivers ample amounts of shocks and blood. The actors give it their all and slick production values and camerawork make it much more than the quickie, cheap horror movie the generic title and DVD cover may suggest.

A fully rewarding horror experience, ‘The Guard Post’ is a superior slice of Korean genre filmmaking. The slow build up may put some viewers off but give it a chance and there mercifully isn’t a long haired ghost girl in sight.