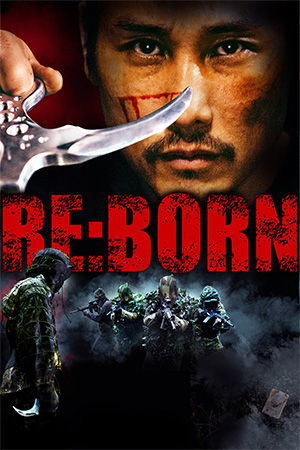 ‘Versus’ alum Tak Sakagchi (star) and Yuji Shimomura (action director) re-team for an adrenaline blast of pared back action awesomeness in ‘Re:Born’. The two also collaborated on the underrated action flick ‘Death Trance’ (seek it out, it’s some fun times) and their union once again delivers the goods. Tak is Toshiro a seemingly lowly supermarket manager, living a peaceful existence, trying to raise his lively niece as best he can. Yet his quiet cool exterior hides a deadly fighting machine: who once belonged to an elite squad of vicious killers. Despite his attempts to lead a quiet life he can’t leave his violent past behind or the finely tuned senses it cultivated within him. As is the nature of attempting to leave behind such a brutal past it soon comes catching up to him as those he deserted now want bloody revenge. And for the lack of a better phrase: all hell breaks loose!

While ‘Re:Born’s narrative appears to be nothing revolutionary, certainly within the action film arena, it’s all in the execution and incredibly staged action which sets it apart from similar former-soldier’s-past-comes-back-to-haunt-him flicks. There’s a heightened reality at play which while never spilling over into full blown OTT comic book territory certainly imbues the film with a sense one is watching an ultra-violent graphic novel come to life. This may irk some but it never detracts from the story or the sustained tension and gritty nature of the violence that Shimomura expertly crafts. Despite the brutality on display there is a gentle heart that beats throughout with the kindly relationship between Toshiro and his niece he looks after. Shimomura wisely spends time showcasing their life together, before the action erupts, to illustrate how Toshiro has adapted back to the real world and how he still struggles to leave his old life and impulses behind.

While there are nifty bouts of fight action peppered throughout the first half of the flick, it’s just after the midway point that all the glorious “zero range combat” really kicks off. The close quarter combat used in the film is quick, vicious and creatively uses hands, feet, knives (and other nifty looking blades!), gunplay and in one particularly inventive scene, a spade (!) to cause maximum damage with minimum fuss. When Toshiro decides to take up arms ‘Re:Born’ becomes a glorious unrelenting rampage of fight action as he makes his way through a forest cutting through wave after wave of bad guys with fierce skill and determination. It’s a non-stop barrage of action that should sate any fight fan and is mercifully free of CGI enhancement or tricksy editing. This is down and dirty, bare bones, brutal fight action that showcases the craft and skill of all involved to create pure unfiltered, exhilarating action.

It may be a little too simplistic in its narrative for some (though it really is all the better for it) and others may find the one-man-army slant pushed to its limits (though he does have some help!) but ‘Re:Born’ is a triumph for all involved. If you’re an action film fan, try to not over-deconstruct proceedings and just sit back and enjoy the expertly crafted fight action thrills.