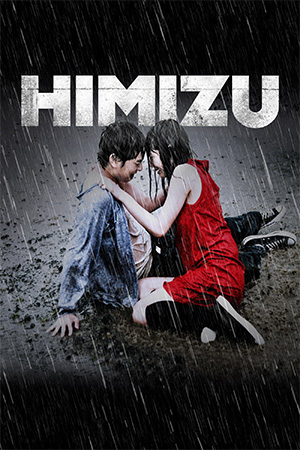 A dystopian Japan still reeling from the after effects of the 2011 tsunami; disaffected youth trying to find their way in the world; a vast array of oddball characters; an unnecessary amount of misogyny; and ridiculous amounts (and I mean ridiculous amounts) of screaming and shouting: why, it must be the new film from Sion Sono. The director of ‘Suicide Club’, ‘Cold Fish’ and the incredibly epic ‘Love Exposure’ wastes no time in framing his new tale of lost souls and general weirdness around the awful natural disaster that hit Japan in March 2011.

Sumida (Sometani) lives in a small shack with his mother, helping her run their boat hire business. Surrounding the shack are an oddball but kindly collection of characters, all cut off from society and living in make shift huts since the tsunami. They look out for Sumida and believe he has a bright future and can go on to achieve more in life and encourage him to do better. Likewise, Sumida’s classmate and (not so) secret admirer Chazawa (Nikaido), who is so wholly in love and devoted to Sumida, will do anything and everything to ensure he lives the life (that will hopefully include her) where he is happy. Sumida just wants to lead an “ordinary” life but between Chazawa’s affections, his useless mother, his abusive dad, a debt which needs paying and a boatload of teenage angst, well, leading an ordinary life just isn’t that easy.

In fact, attempting to be ordinary is downright difficult, and in Sono’s world, very often bizarre. Ramping up teen angst to stratospheric heights and mixing it with way too much abuse towards women, some bloody violence and an oppressively bleak vibe, Sono’s film gets lost in its own dreamlike quality and insistence on being relentlessly shouty. At two hours it all gets a little tiresome, as we learn life is shit, people are shit and being a teenager in a modern world is shit. In fact, life is so shit that our protagonist, and on occasion, many of his co-stars and the boat shack set are covered in mud, just to let you know how shit life is. Sono certainly has his own style (a kind of love it or hate style) but he pushes his “art” just a little bit too much here, meaning the film often feels like a series of lengthy shouty rants.

However, despite all this there is hope to be found in this bleak tale: albeit buried under violence, misogyny, jet black humour and mud. The two young protagonists, no matter what is thrown at them, continue to power through all the relentless nihilism and as they memorably chant at one point, don’t give up. Given Sumida is actually a bit of a shit (and continually slaps Chazawa no matter how nice or helpful she is to him) Sono does make us hope that he gets through all the madness and comes out alright on the other side. Chazawa, despite her unhealthy obsession with Sumida, is like the bright light within all the darkness, and her warm heart means there is always a thread of hope running through the film no matter how desolate proceedings sometimes feel. Shota Sometani and Fumi Nikaido are absolutely brilliant in their roles of the youngsters and arguably make the film a lot more watchable than it should have been as events often slip into excessive pretension.

An original piece of cinema ‘Himizu’ certainly is but it’s not always a successful one. Not as enjoyable or as accomplished as some of the director’s other efforts such as ‘Suicide Club’ and ‘Love Exposure’ but worthy of a look if you’re a fan of Sono’s work and “non-conventional” cinema (which if you are, you may want to add another star).