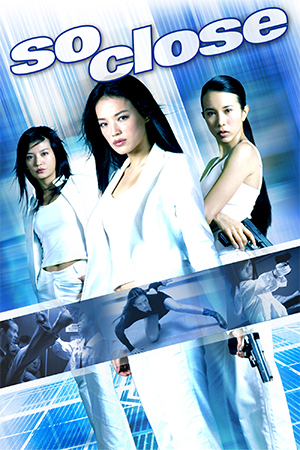 Hong Kong has never been shy of casting women in leading action roles. Lately, this trend has spread west, with characters like Trinity in ‘The Matrix’ or the 3 Charlie’s Angels. Coming back full circle, ‘So Close’ sees Chinese women take on the action roles again, but this film probably owes more to its recent American influences than that of 80’s landmark HK fight-fests such as ‘Yes, Madam’ or ‘Royal Warriors’.

The director here, Corey Yuen Kwai, was one of the first to afford women equal footing in the action stakes giving actresses such as Cynthia Rothrock, Michelle Yeoh and more recently Bruce Lee’s daughter, Shannon Lee, their starts in the industry. He is not afraid to let these women both dish it out, and take it back in regards to the fistfights, however, his testosterone during the filming of this feature also gets him to show these women as sexy and vulnerable. No bad thing when the eye candy is Shu Qi and Vicki Zhao.

There is no mistaking that there is an interesting, multi-layered story on offer with ‘So Close’, but as is so often the case in recent years, the dialogue is fairly poorly written and the plot is often too implausible to ignore. Shu Qi and Vicki Zhao are sisters whose parents were murdered and now use their technological and physical skills as hired Assassins. Karen Mok is their alter ego in a sense, being equally skilled but is the Inspector on their trail. Without giving too much away, they predictably end up working together towards the end to bring more sinister people to ‘justice’.

Being a Corey Yuen Kwai film, it is the action we should be focussing on, and this is thankfully plentiful and well crafted. The physical skills of the actresses are not up to the standards of Rothrock et al; so some ‘covering up’ has had to be done. In this case, a lot of the fights are slowed down, quick cut or shot through sweeping virtual camera angles. However, the actual choreography displayed is often a step above what has been on offer for a number of years.

Yuen’s use of CG and special effects in this film often works well to add polish to what is essentially designed to tantalise the eyes rather than exercise the brain. However, the budget does not seem to stretch far enough, and many effects (such as CG glass) are over used and obvious. Still, as a piece of eye candy it does its job and consistently looks good throughout.

At the end of the day this film is just a throwaway 90 minutes. Polished, entertaining fluff, but still fluff nonetheless. Those who prefer their films with realism, consistency and grey matter should steer clear, but those with a spare couple of hours and a penchant for attractive women shooting up enough plate glass to build a large greenhouse should rent this today.