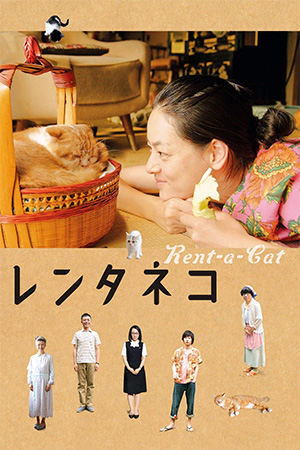 Japanese woman Sayoko has an unusual sideline. Once a day she walks along the waterfront, pulling a cart with an array of cats on it, offering a feline to anyone who is lonely. Her personal rent-a-cat crusade brings comfort to a variety of isolated souls: an old woman, mourning the loss of her husband and beloved cat, gladly accepts a docile ginger moggy while the disenchanted receptionist at the local Rent-A-Car office is given a fluffy companion to keep her spirits up. Yet Sayoko herself hopes to meet someone special in life, a yearning that her affinity with cats can only temporarily soothe.

‘Rent-a-Cat’ is one of those enigmatic films that require a little effort from the viewer and, in this case, the reviewer in attempts to describe why it works so well. It’s a comedy without any real jokes, a contemplative piece without any overt drama and a film that is about something so simple yet resonates with meaning in the background. If find myself saying once again that only Japanese cinema could be responsible for a work as softly meditative and suitably soothing as ‘Rent-a-Cat’.

It would be all too easy to dismiss a film like this for its lack of narrative drive, yet director and writer Naoko Ogigami – who thought of the idea while observing the calming effect of a cat on her widowed father – purposely favours an episodic format. Moments gently repeat themselves throughout the story in a way that is more akin to avant garde film-making than typically linear popular cinema while characters are not fleshed-out in a traditional way. ‘Rent-a-Cat’ is about mood though, it is a mixture of the quirky Japanese love of kawaii (or ‘cuteness’) and pensive, zen-like examinations of loneliness.

To enjoy ‘Rent-a-Cat’ it certainly helps if you find meowing balls of fur utterly adorable, but it certainly isn’t a pre-requisite; beneath the simple premise is a dissection of friendship and finding one’s place in society that is about as good as cinema has ever shown. Naoko Ogigmai has martinet control on her work and ensures that it never becomes quirky and zany just for the sake of it – a failing that often afflicts Japanese comedies. Her leading lady Mikaki Ichikawa is every bit as watchable as her feline co-stars and just as captivating, dishing out her cat therapy with dogged (oops!) determination. Long after the final tabby is back in its basket, ‘Rent-a-Cat’ leaves a lingering impression that should disarm those of even the most ardent cynicism while offering food for thought for those willing to look beyond the obvious.