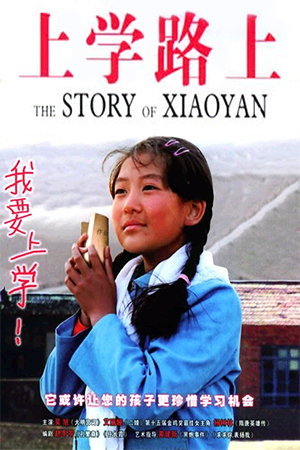 Thirteen year old Xiaoyan is devoted to her studies at her local school and determined to use them as a spring-board out of her mundane fate. Unfortunately for her, the school fees for the new term are set to increase from 20 yuan up to 24 and her mother, struggling to cope on her meagre income while her husband is away working, is unwilling to stump up the new amount. Young Xiaoyan is made of sterner stuff though and, in between looking after her two troublesome younger brothers during the holidays, she thinks of a way to raise the money herself. Initially she takes eggs from home and tries to sell them at the market, but this scheme proves to offer scant reward for her efforts. Inspired by the transactions of the local cattle market, Xiaoyan forms an unsteady alliance with a street-smart urchin to raise a lamb with the intention of selling it on later for significant profit.

Chinese cinema is going through a rejuvenation at the time of writing with bigger budgets and a more international perspective to utilise. Yet simple, exquisitely shot films like ‘The Story Of Xiaoyan’ are still a product China can be thoroughly proud of, earthy stories that have a cinema verite feel to them while also being completely absorbing dramas. Fang Gangliang’s ‘The Story Of Xiaoyan’ – or ‘A Unique Schooling’ as it sometimes referred to – is the kind of film that delights while also teaching the viewer something about a culture very different from their own.

Much of the global emphasis on China at the moment focuses on its growth as an economic powerhouse packed with vast futuristic cityscapes. Productions like the one discussed here are so fascinating because they show a rural China that has been brushed under the carpet by the international consciousness today. ‘The Story Of Xiaoyan’ takes place in a sparse, haunting environment that seems uninhabitable, yet supports a thriving community . This relative wilderness becomes a significant character in the narrative and director Fang Gangliang uses it to dwarf his leading lady while also showing how she triumphs over it. The photography alternates between intimate shots of rustic life, close-ups of the busy day-to-day routine, and wide-angled shots of how vast this area is and how isolating it can become. The atmosphere engendered by the attention to the look of the film sets the foundation for a captivating story.

‘The Story Of Xiaoyan’ is, ultimately, the story of one girl’s gumption and refusal to give up in the face of adversity. It may appear trite to say it, but viewing it in a country where children do everything NOT to attend school is a humbling experience. The sheer urgency of Xiaoyan and her desperation not to be married off like one of her contemporaries or resigned to be made to feel worthless is as heartening a piece of cinema as I can remember. Much of the achievement belongs to Wu Xu who is exceptional as the spirited Xiaoyan; her fortitude and obvious acumen are impossible to ignore. She, and her director, show us that films about children don’t have to be dumbed down nor do they have to try to desperately please young and old alike – a good story will take care of that. After being subjected to western productions where kids are annoyingly precocious and completely uninteresting, ‘The Story Of Xiaoyan’ reminds us that there are valid stories about youth to tell.