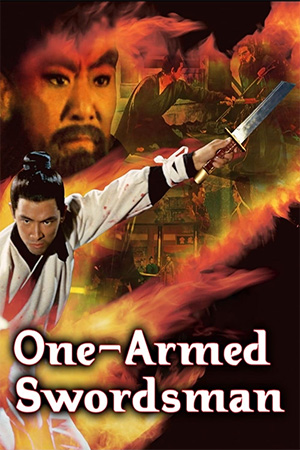 Few films have had the impact on Hong Kong cinema that ‘One-Armed Swordsman’ can boast. Not only did it herald an era of the new-wave swordplay film, but it also made Wang Yu into a superstar and an icon of the Jade Screen while helping Chang Cheh’s career to truly ignite. This beloved classic has a reputation that has stretched over three decades and influenced a plethora of later productions. It is therefore intriguing watching this landmark film after 30 years later and appreciating its place in the history of Eastern cinema.

Feng Kang (Yu) is a quiet, yet earnest pupil of a legendary swordsman’s school. Because of this humble and introverted nature, Feng finds himself mocked by his contemporaries and constantly bullied from day to day. After finally reaching breaking point, the young swordsman decides to leave the school, but is followed by a gang of his tormentors and confronted in a snowy wilderness. The ensuing showdown sees Feng easily defeat his opponents with his superior skills, but a shocking altercation sees his arm severed. Just managing to get away, the seriously injured man collapses and looks sure to die. Thankfully he is saved by a kindly woman who gradually nurses him to health and helps him to adjust to his disability. In time, the woman offers Feng the gift of a special sword fighting manual and after years of study he becomes are near-invincible one armed swordsman. This prowess comes in useful when a villainous swordsman targets Feng’s old school with the intention of ruling the martial world. It is Feng Kang then who must protect those who once hated him and save his master’s life from the dreaded killer.

On paper, the narrative doesn’t appear to be anything out of the ordinary, but when put into its historical context, it’s easy to understand ‘One-Armed Swordsman’s importance. With a definite nod towards Japan’s great Chambara films, director Chang Cheh creates a mature and monumental swordplay classic. The first skill is Cheh’s acceptance that the plot is extraordinary and therefore the superheroics that follow seem strangely realistic. Even the ludicrous scene of Wang Yu losing an arm is filmed in a very powerful way; the effective surroundings and genuine drama validate this pivotal moment.

It’s fair to say, though, that not all of ‘One-Armed Swordsman’ has aged well. Although groundbreaking in 1967, the actual sword fighting action looks too staged to modern eyes and never really excites in the way it should. Perhaps some may also find the aforementioned moments of drama a bit too incredible; certainly to Western eyes it is somewhat histrionic. Nonetheless there’s plenty to recommend it beyond the historical significance. Wang Yu has never been better than as the troubled hero and his performance is nicely understated at times. Yu’s inexperience is never an issue in the lead role and Feng Kang is successfully made into a sympathetic hero. Without any argument, ‘One-Armed Swordsman’ is therefore a quality swordplay film that has much to offer to viewers today.