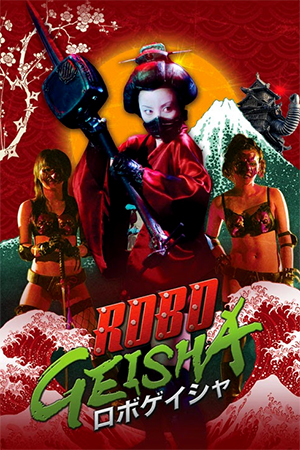 You’d think after all the madness and mayhem thought up and put on show in the likes of ‘Machine Girl’, ‘Tokyo Gore Police’, ‘Vampire Girl vs. Frankenstein Girl’, ‘Meatball Machine’ and ‘Samurai Princess’, those crazy, gore loving, good taste obliterating Japanese directors would be running out of Looney Toon concepts and bad taste scenarios to make a movie out of. It would appear not as Machine Girl’s writer/director returns with another bonkers, female orientated, over-the-top, ultra gore epic: ‘RoboGeisha’.

As can be deduced from the rather straight to the point title, ‘RoboGeisha’ is about, well, a robot geisha: one who can swing samurai swords, shoot guns from pretty much every part of her body (and I mean, pretty much every part!) and on certain occasions, transform herself into a tank! Yoshie (Aya Kiguchi) is a quiet, mousy young woman, forever in the shadow of her violently abusive sister Kikue (Hitomi Hasebe). Kikue is a much sort after Geisha and all Yoshie would like is a chance to be as popular and successful as Kikue. This chance arrives in the form of shifty Hikaru (Takumi Saito) who “recruits” the two sisters into his Geisha soldier training academy.  Here the tables are turned as Yoshie discovers her talent for fighting and killing, making her the most popular. The sister’s rivalry reaches new extremes as the two take to drastic body modification turning themselves into robot fighting Geisha. But Yoshie soon learns that her new found skills and popularity come at a cost as Hikaru and his bosses have devious plans for Yoshie and her fighting females. Thus Yoshie turns against those who have trained her using all her robotic enhancements to unleash all kinds of blood soaked carnage and Japanese lunacy.

Trying to accurately describe these bat shit crazy Japanese flicks is a task in itself but if you’ve seen and are into the previously mentioned flicks such as ‘Machine Girl’ and ‘Tokyo Gore Police’, then you know what to expect. Iguchi directed the (so far) best in this genre, ‘Machine Girl’, and his gleeful sense of fun and absurd creations are very much evident here and are backed up by decent pacing, production values and a game cast. He knows when to take a break in between all the gore soaked madness to let the characters (however thinly drawn) show through before bombarding us with more blood spewing, taboo pushing imagery. While the CGI is a little ropey (but adds to all the silly fun) ‘RoboGeisha’ has slightly better production values and fight scenes than usually found in this genre, making it a rather slick, action packed package. But don’t worry fans of absurd, ultra violent, body modification Japanese horror: ‘RoboGeisha’ is still rammed with oodles and oodles of craziness.

Lets see, we get: machine gun boobs; armpit swords; girls firing ninja stars out of their butts; schoolgirls fighting robot samurais; a castle that transforms in a giant robot (just in case our heroine transforming into a tank wasn’t enough transforming for you!); girls fighting with swords protruding from their butts(!); two Tengu warrior women who take to wearing phallic appendages which fire out something called the “breast milk from hell!”; a militia of old people with guns; all kinds of inappropriateness; and the requisite amount of blood spurting and limb severing these films always come with.

So the usual delirium all served up as a fun, fast moving, not to mention often eye popping ride and certainly a better addition to this genre than recent offerings have been. With its overtly female slant (which a lot of these genre films seems to have) one could make a case that ‘RoboGeisha’ is also doing a lot for female empowerment (though the females often have to endure a lot of weirdness and trouble before gaining such empowerment) but most likely we will all be watching this for the same reason: machine gun breasts! ‘RoboGeisha’ is likely to be the best film about a robot Geisha ever made, has midnight movie cult status written all over it and if you are in the mood for it, is an absolute hoot. ‘Memoirs of a Geisha’ it ain’t!