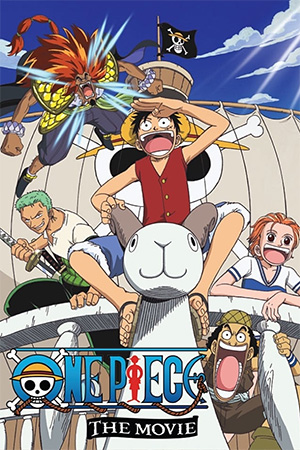 ‘One Piece’ is a nautically themed manga which has been so successful that at the time of writing this it is approaching its 515th publication, 370th anime episode, and tenth movie offering. Being one of its proud fans, I felt it was a good time to cast a critical eye back over the original movie and perhaps bring a few new fans aboard the Going Merry!

There was once a pirate known as the Great Gold Pirate Woonan who obtained over a third of the world’s gold and hid it somewhere on a remote island. That treasure is now being sought by the great and fearsome El Drago, who has killed many to obtain the map that should lead him to the location. Meanwhile, Luffy and the gang are sailing towards the Grand Line when a few members of El Drago’s crew decide to try and steal from them. After putting a stop to their antics and hearing of their quest, Luffy decides now is a good time to take a detour and perhaps meet a legendary pirate who can join their crew.

Like most movies based around an ongoing anime series, this first big screen outing for the Straw Hat pirate crew is made up of a filler storyline. This means it is completely unrelated to any developments seen within the show and normally always contains two common variables; a small child who befriends and learns from the heroes, and a set of averagely strong bad guys who are defeated by the end of the movie and never mentioned again. Normally this also always results in a feature length stinker but on this particular occasion it is surprisingly entertaining.

Although it only lasts a mere 50 minutes and does contain both of the plot devices mentioned above, ‘One Piece: The Movie’ excels by concentrating on importing across all of the essential character traits and humorous interactions that have made the show such a success. By doing this, they avoid dwelling on the rather simplistic story and opt to focus on recreating the relationships between all four of the main crew members (yes fans, this was made at a time when there were only four of them!).  Thankfully this is done perfectly and the essence of what was a blossoming show is captured in movie form without ever allowing regular viewers to lose focus and start picking holes.

When it comes to the action in this movie, it’s handy that this was made at a time when the central characters were still utilising their basic fighting skills.  For some reason, anime writers seem to believe that if the heroes show off their developed special powers in a film it will somehow spoil everything for the show. However, that isn’t the case here as both Luffy and Zoro had already been using their signature moves from the first few episodes and are allowed to let rip with each of their techniques.  The bad guys they are pitted against aren’t exactly going to cause a major threat but they are suitable foils in terms of powers and allow for a fitting all-action finale with some great “Gomu Gomu” attacks.

Although it barely scratches the surface in terms of the quality of the show, this is a good example of how to make an anime series into a film without giving away any of the finer details. It’s got all of the right ingredients when it comes to the characters and provides a nice little taster that will hopefully impress newcomers and satisfy existing fans.