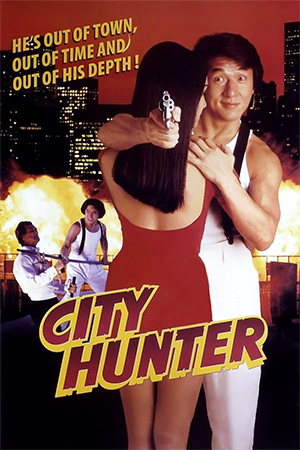 When the daughter of a rich businessman goes missing, there is only one private detective that her father can possibly turn to – City Hunter (Chan).  Hunter is renowned as the best in the business and, with the help of his assistant Kaori (Wong), is soon hot on the trail of  the missing girl.  All of the clues point to a cruise ship which the girl is believed to have conned her way onto so Hunter stows away in the hope of locating his target.  Unbeknownst to everyone though, this ship also houses a group of International terrorists headed by the fearful Donald Mac (Norton) who has plans to relieve the passengers of their wealth.  Luckily though, there are several other talented fighters on board and with their combined ability they can surely put a stop to his evil plans.

‘City Hunter’ originally hails from a manga comic strip and even on the first watch of this film its influence is very apparent.  From the zany opening credits that feature 60’s style Batman effects right down to the psychedelic ‘Street Fighter’ duel between Chan and Daniels, this feature wreaks of the over-the-top style seen throughout the craziest Japanese anime.  Conveniently, this approach goes hand-in-hand with Wong Jing’s directorial technique that is often a little extreme, mainly thanks to his habit of inserting humour that can be best described as cringe-worthy.  However, in a film like this it seems to fit perfectly and the combination of wacky humour and Chan’s superior comedic timing make ‘City Hunter’ a lot of fun to watch.

Essentially for a Chan film, ‘City Hunter’ also features several good action sequences as Jing lines up worthy opponents for Chan in the form of Brit-kicker Gary Daniels and Richard Norton.  As mentioned earlier, the use of the video game license from the ‘Street Fighter’ series makes for a highly amusing battle between Chan and Daniels that is much more successful at re-creating the computer antics than Van Damme’s dire effort. As is synonymous with Chan films though, the best is always saved for last when Chan and Norton go toe-to-toe in a battle that features everything from weapons to bootwork.  This finale proves to be extremely satisfying and offers a more fitting conclusion than the majority of  Chan’s later (particularly American) efforts.

‘City Hunter’ is definitely a strange film in the Chan back catalogue and it’s one that fans seem to either love or hate.  The influence of Wong Jing in the director’s chair is a prominent one and his sense of humour certainly prevails throughout to the extent where it can hinder as well as help.  For me though, this film is best suited to his style and thanks to some classic Chan moments and superb action, this movie earns a healthy four stars.