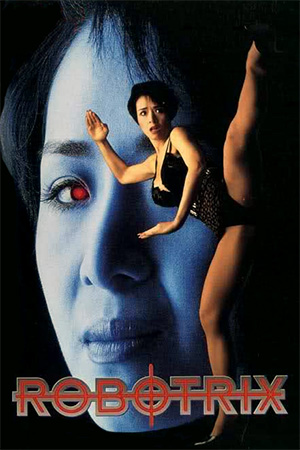 Boobs. Robots. Kung-fu. “Comedy”. Sleaze. More boobs. That’s ‘Robotrix’ in a nutshell: an extremely dated Category III exploitation flick that, a few nasty bits aside, is more camp than cool. Equal parts ‘Robocop’ (well, sort of!) and Russ Meyer film, ‘Robotrix’ is pure silliness from start to finish but has enough slick kung fu and plenty of big boobs to make the running time bearable. An evil scientist has transplanted his brain and soul into the body of a sleek, young martial arts whiz robot (Billy Chow). Said robot goes on a rampage of killing and destruction and it’s up to the mega busted Amy Yip to stop him. She also happens to be a robot and enlists the help of resurrected from the dead Chikako Aoyama, a cop who, for reasons that will cause this reviewer’s brain to explode if he tries to explain them, is now also a robot. Campiness, boobs, a good dose of fighting action and the quest to stop Chow’s rampage ensue.

‘Robotrix’ starts as (an extremely camp) thriller with the kidnap of some important person, segues into a bit of action with the world’s most ridiculous robot show where several (very unconvincing) robots battle it out to prove who is the best before the narrative then segues into a soft-core sex comedy. A good chunk of the running time is spent on fellow cop David Wu attempting to woo big breasted robot Aoyama while the rest of the police force have a go at bedding the even bigger breasted Yip. This is all kinds of tedious, goes on far too long but the frequent bouts of nudity (Aoyama gets naked, Yip doesn’t unfortunately!) does liven things up. The smutty comedy doesn’t sit too well along side the nastier moments of Chow’s character raping and killing but Category III flicks aren’t exactly known for their coherent tone. While the comedy is dated and drags on too long, it is somewhat humorous in a very silly way and one can’t help but be amused by some of the very daft robot designs.

Yet what ‘Robotrix’ does have, is plenty of boobs and robot fighting action. This is probably the bustiest robot action flick you’re likely to see and the leading ladies’ ample charms certainly help the running time pass pleasantly. The action, more abundant in the second half of the film, is fairly well done and often bloody. Wire assisted to give the heightened feel of robots clashing, the action is fast and fluid and sees certain cast members dispatched in a variety of over-the-top ways: not least a scrap in the obligatory abandoned quarry, where limbs literally fly! Chow gets to flex his considerable martial arts talent and Amy Yip is surprisingly adept at the punching and kicking despite her ample bosom.

While not as strong in content as some of its Category III counterparts, ‘Robotrix’ is still a load of trashy nonsense that unfortunately has a few seedier elements that don’t always sit well with the campy fun and decent fight action. It’s a pity this wasn’t more of a straightforward action film but then again the Russ Meyer boob vibe certainly made the film much more entertaining than it should be.