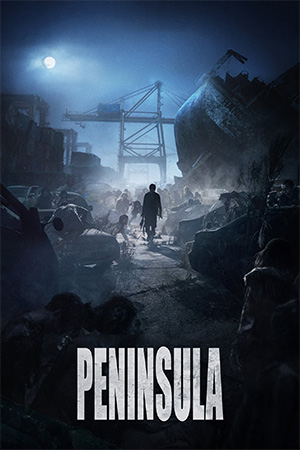 Four years after the incidents in ‘Train to Busan’, Korea is shut off from the world as it is now completely infested with the zombie undead. Those lucky enough to escape have fled to unaffected areas, such as Hong Kong, in the hope of seeking refugee status. However, said survivors are not exactly welcome with open arms, as they are potential carriers of the zombie virus. Eking out an existence is former soldier Jung Seok (Gang Dong-Won) who, in the tense prologue, we see escape to Hong Kong. He and a few of his fellow refugees are offered a chance to reclaim their lives by sneaking back onto the Peninsula to retrieve millions in left behind cash. Armed and buoyed at the possibility of a new life, Jung Seok and his crew infiltrate the Peninsula no problem but grabbing the cash, outrunning hordes of the undead and surviving the violent wilderness Korea has become, proves far from straightforward.

‘Train to Busan’ was a rocket fueled, tension tight, zombie adrenaline rush that used its cramped settings and eclectic cast to craft a refreshing undead horror. ‘Peninsula’ had a lot to live up to and it all looked promising with the initial turbo-charged teaser trailer. But while there is a lot to enjoy here it’s unfortunately not a case of lightning in a bottle striking twice. It’s great to expand the (zombie) world created in ‘Train to Busan’ and kudos to Yeon Sang-Ho for not just re-treading the train-set madness of the first one, but the zombie apocalypse world seen in ‘Peninsula’ just isn’t as thrilling. It’s certainly well rendered, large in scope, contains all kind of dangers and Jung Seok is an interesting antagonist to lead us through this world (there’s no returning or reference to the characters of the first film!) but there just isn’t the surge of momentum and tension that benefited ‘Train’ so well.

There’s a surfeit of characters all with various motivations and a fair bit of pace numbing set up that unfortunately wastes the killer concept of a squad infiltrating a zombie infested wasteland to steal some cash and get out alive. It feels like there a lot of ideas that are never fully fleshed out (including the much anticipated “rat-king” sequence seen in the trailers!) that one misses the relatively simple concept of a bunch-of-passengers-trapped-on-a-train-with-zombies of the original.

Instead the makers focus more on setting up the various motivations of all the interconnecting characters and then wasting it all on several mammoth CGI car chases! Yep, it all goes a little ‘Fast & Furious’ as the bulk of the action is taken up with CGI enhanced vehicular mayhem. While ambitious and creative (and to a point needed to create sustained chases through a derelict Korea) the CGI unfortunately takes one out of the film somewhat and feels more akin to watching a video game than a well mounted zombie-action flick. The first film used (lack of) space, practical effects and Ma Dong-Seok using his fists to stage better tensed filled action than any amount of CGI. It’s a shame as there’s no doubting the ambition but the film works better in its smaller scaled, practical action such as when Jung Seok takes on zombies with a machine gun or the eye-boggling rat-king-zombie-brawl sequence.

If not constantly compared to its successful predecessor, ‘Peninsula’ is still an enjoyable zombie-action ride and there is no doubting that Yeon Sang-Ho can stage a set-piece (CGI or otherwise!) and craft a (mostly) entertaining film of larger-than-life scope.