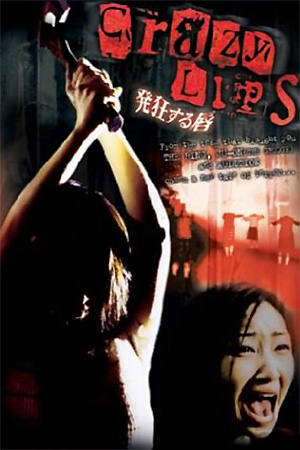 When it comes to cinema, very little shocks me anymore. I’ve witnessed so many fictionalized atrocities that it takes a seriously deranged endeavor to get my jaw to drop. ‘A Serbian Film’ and ‘Seasoning House’ both managed to properly turn my stomach, so I know it’s still an achievable goal. Little did I know that something truly warped lay in wait, ready and willing to do awful things to my already damaged mind.

I’m not sure how I managed to miss writer/director Hirohisa Sasaki’s 2000 horror outing ‘Crazy Lips,’ but it slipped under my radar for nearly 16 years. I discovered this twisted little gem while ordering ‘Karaoke Terror’ on Amazon, where it popped up as a recommended title. The terrible cover art immediately captured my attention, and after reading the description, I figured I had nothing to lose. And while the Amazon reviews helped set the tone for the experience, they didn’t adequately prepare me for what I was about to see.

Describing ‘Crazy Lips’ can challenge even the most gifted writers, so I’ll do my best to lay out the basics. The film’s first act follows a family as they struggle to deal with the fact that one of their own may have murdered a handful of innocent girls. Day and night, journalists swarm their home, eager for someone to give them a juicy, noteworthy sound bite. Of course, the mother and her two daughters refuse to believe that the brother committed these unspeakable crimes, but his sudden disappearance complicates the matter. Their lives are troubled, to say the very least.

Desperate to prove his innocence, one of his sisters enlists the services of an oddball psychic and her perverted assistant. It’s easy to see that something’s not quite right with their arrangement, but the sister doesn’t seem to care: She wants to prove her brother’s innocence and firmly believes the psychic will provide the answer to her prayers. Unfortunately for the sister and her family, it doesn’t take long for these good intentions to pave a road straight to hell.

‘Crazy Lips’ begins innocently enough, but when the perversions start to roll in, things quickly spiral out of control. If you’re sensitive to rape, gore, or torture, then you should strongly consider sitting this one out. And if you don’t think those elements sound all that shocking, let’s take a look at the following example. After raping the mother and one of the daughters, the psychic’s sidekick sets his sights on the youngest member of the family. Feeling particularly devilish, he forces her to have sex with a hanging corpse while simultaneously sodomizing her. So, there you go. Like I said, this movie travels roads I’ve never explored, so kudos to the filmmakers for giving me something new.

To be perfectly honest, I didn’t have a very strong grasp on what was happening most of the time. I did, however, appreciate the film’s abundance of inky black humor, it’s X-Files-inspired side characters, and a third-act kung fu fight that seemed to come out of nowhere. Judging the flick as anything other than a piece of shock cinema would be unfair, as it doesn’t seem to want to do anything other than to pummel your mind with a dizzying assortment of sleazy sights and sound. Mission accomplished. I can appreciate that.

Although the film ends on an abrupt and very bleak note, Hirohisa Sasaki released a follow-up, ‘Gore from Outer Space,’ in 2001. And while I haven’t had the pleasure of stuffing that flick into my brain as of this writing, it’s on my list of things to do before the end of the year. That’s my life in a nutshell.

‘Crazy Lips’ exists as a curiosity piece for people who adore bizarro Japanese cinema infused with nonsensical plotting and an abundance of sleaze. I wouldn’t say it’s a good movie, but it serves its purpose in a relatively short amount of time. After all, when you’re dealing with headless corpses, zany fight sequences, and rape scenes involving double penetration and corpses, 80 minutes is about all anyone can take. Proceed with caution, even if you’re well-versed in the world of strange, off-beat cinema.