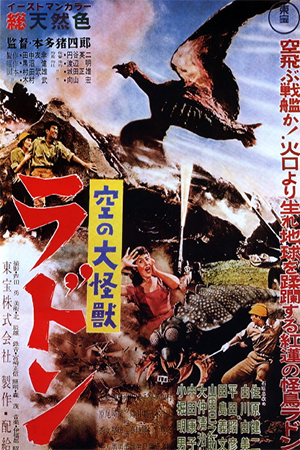 The first of Toho’s monster movies to be released in colour, ‘Rodan’ ranks as one of the best Kaiju movies out there. Still standing the test of test of time, ‘Rodan’ excels in the monster movie arena with its mutated caterpillars and giant winged prehistoric creatures terrorizing a quiet Japanese mining community before heading into the city for some mega destruction. Kicking off with some dated but eerily effective stock footage of atomic bombs going off, the flick switches to a small mining town where some of the miners are disappearing down the pits. It seems the bombs have stirred something and they are making their way to the surface. Soon the town is overrun with giant caterpillar like creatures before the gigantic prehistoric creature known as Rodan is unearthed and begins wrecking havoc across Japan.

For the lack of putting it any other way, ‘Rodan’ is simply awesome. It follows a fairly routine monster movie plot: bombs mutate/awaken giant monsters which go on a rampage, the military and science boffins doing everything they can to stop them before the inevitable mass city destruction. Ishiro Honda directs with an efficient hand nicely building things up at first with miners disappearing into the waters down in the mine shafts, quick glimpses of shadows of the creatures before their eventual reveal. Once the monsters are let loose its pretty much non-stop destruction as two flying Rodan’s, yes you get two giant bird creatures here (cool!), lay waste to the military and finally a nearby city. Despite the film being well over fifty years old, the monster set pieces are pretty audacious for the time, the barrage of explosions, missiles fired and monster destruction impressive enough to make a certain Michael Bay green with envy. Sure, the effects are dated (complete with toy tanks!) but that’s all part of the charm of Kaiju movies and it certainly doesn’t hinder the imagination of the filmmakers. Bridges, countryside, jet fighters and cities destroyed by the mega winged monstrosities and the militaries non-stop firing of missiles. Great stuff.

The switch to colour gives the film a cool vibe as well, a rich colour palette used and the filmmakers even have some fun with a silly couple who, despite the fact there is a giant winged creature soaring the skies, decide everything is ok and go out for a drive to take pictures. Well, it isn’t long before they are regretting their decision. It’s maybe a little disappointing there is no monster vs. monster action but ‘Rodan’ is still a top entry in the Toho Kaiju movie world and a fine introduction of the monster movie into the world of colour. It might not feature the Big G but ‘Rodan’ is pretty hard to beat.