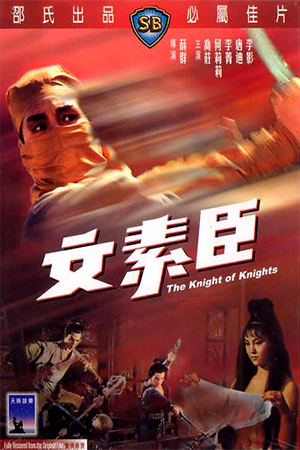 When six of his sworn brothers are killed investigating a monastery, Wen Su Chen decides to enter the premises undercover. Posing as a travelling scholar, Su Chen quickly locates a secret passage that leads to their underground lair. After several scuffles with the monks, he uncovers evidence that their dastardly deeds involve both corruption and kidnapping. Luckily though, Su Chen has kept his identity a secret so he is able to continue his investigations unheeded. However, when the Minister he works for becomes a target, Su Chen is forced to expose his identity so that he can go all out to rescue his employer.

This early Shaw Brothers swordplay flick was produced at a time when the majority of their output was heavily influenced by Chinese opera. As such, the film is a fairly standard tale of good vs. evil that is at times a touch too predictable and old fashioned. That being said however, ‘The Knight Of Knights’ does sport one fairly original concept that makes it stand out from the crowd. While Kiu Chong (the hero) does eventually get a chance to shine in the final third, the majority of the film actually chooses to tell the story from the perspective of the villains. This interesting twist, combined with the typically lavish Shaw Brothers sets and some quick pacing, definitely give ‘The Knight Of Knights’ a little something different.

The action on display in ‘The Knight Of Knights’ is pretty routine for the era and doesn’t exactly push any boundaries. There is little room for the intricacy that the studio later became famous for, and instead it is generally two-hit swordplay duels that see one combatant quickly go down. This doesn’t necessarily make it bad though, as fans of old school style combat will definitely find several highlights to appreciate here. The most notable of these is the opening battle (featuring what looks like the temple from ‘The Twin Swords’) which sees 6 heroes going up against numerous opponents and traps with plenty of room for bloodshed and limb loss.

‘The Knight Of Knights’ could easily be considered standard Shaw Brothers fair, if it weren’t for the slight twist on the style of storytelling. Combine this with some solid leading performances and an abundance of action, and this movie suddenly becomes an interesting curio that Shaw Brothers fans would be advised to seek out.