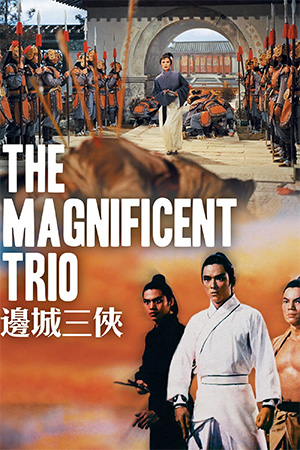 One film I frequently hear about and look forward to seeing when Celestial release it is the Chang Cheh/Wang Yu hit ‘Tiger Boy’, a kung fu drama which is credited as one of the early milestone productions for both men. Until I am able to see it, I’ll be happy to content myself with this fine swordplay melodrama, ‘The Magnificent Trio’. Uniting the cast and crew from ‘Tiger Boy’, ‘The Magnificent Trio’ features a whole range of familiar faces in very early roles and a confident Chang Cheh at the helm.

When righteous knight Lu (Wang Yu) sees three men kidnapping a young woman out in the open, it is only natural that he feels he must intervene and stop the crime. Following them to their destination, Lu confronts them and demands that the victim should be released otherwise the kidnappers will incur his wrath. The antagonists, though, tell a different story; they are in fact three inhabitants of Mati village who have seen their crops destroyed by poor weather conditions, but are still being put under pressure to pay a considerable tax to the local official. Unable to pay the taxes and with threats being issued to the village of Mati, these three simple farmers have taken the law into their own hands and taken the corrupt official’s daughter hostage. On hearing this side of the story, honourable Lu decides to support them, but insists that the innocent daughter be treated with dignity. When the official, General Wei, hears of this rebellious action, he sends a band of his men to rescue his daughter and put the Mati men to death as a punishment. Wei’s men are soundly beaten by Lu who sends out a message that, until Wei exempts the villagers from tributes, he will protect them and support their actions. Outraged, Wei uses the ruthless bandits – who have been imprisoned for their crimes – to kill Lu. Joining this gang is a stranger who accepts the money to help out despite being unaware of the circumstances and one of Wei’s trusted guards, Yan (Lo Lieh). The ensuing battle sees Lu once again victorious, but this time the stranger reveals himself to be Huang (Cheng Lui), a former comrade of Lu during the recent war against Chinese invaders. Naturally Huang joins the cause of the Mati villagers while Yan begins to wonder which side is really the right one to support. A quick succession of tragic events sees Lu taking the blame for the kidnap and Yan deciding to support the righteous cause rather than continue his allegiance with corrupt Wei. Eventually the two sides are well-defined and the ‘magnificent’ trio are pitted against a team of assassins that have been hired by Wei to solve the conflict.

Unusually, the first thing that is noticeable about ‘The Magnificent Trio’ is how young all the actors look; Wang Yu, Lo Lieh and even the venerable Tien Feng look almost unrecognisable here in their varied roles. The actors’ make-up is also disturbingly obvious and they almost look like a New Romantics tribute band rather than the next generation of action stars. These strange factors make ‘The Magnificent Trio’ an uncomfortable viewing experience for the first few minutes and give the production a dated, archaic look. However, those who ignore these faults and stick with it will be rewarded with a superior, emotionally-charged swordplay  film that has far more qualities than distractions. Certain parts of the film look dated, but most of ‘The Magnificent Trio’ seems remarkably fresh considering its nearly thirty years old and made near the beginning of the genesis of the genre’s modern era. The themes, emotions and characters are all familiar Chang Cheh devises though this is certainly no bad thing; Cheh has used these to great acclaim so many times in the past, but such timeless displays of chivalry and honour are always absorbing to watch. The characters are, to some, stereotypes of the genre though their nuances give them a very human edge that makes them easy to empathise with. Importantly, the strength of ‘The Magnificent Trio’ is the development of what starts out as a very simple plot while there’s also a few excellent scenes that cement the quality of this fine film. Chief amongst these is Lu’s acceptance of the Mati villagers terrible punishments; such a moment of chivalry is classic Chang Cheh and shows how the director uses bold statements to get his messages across.

‘The Magnificent Trio’ benefits from its strong casting and the successful bonding of the eponymous trio. Despite looking younger than his character should have been, Wang Yu is a commanding figure as the heroic Yu while Lo Lieh is a supreme influence on the narrative as the tortured Yan; his performance here is a reminder of how Hong Kong cinema will surely miss his presence. The underrated Cheng Lui is perhaps the highlight of the film in his role of Huang – although quite a muscular actor, he shows an admirable aptitude for the finer emotions in this movie. With a director of considerable merit, a cast of fine performers and action that, while not exactly trail-blazing, is certainly very watchable, ‘The Magnificent Trio’ is another good release from Celestial. This is an ultimately tragic swordplay film that is well worth watching.