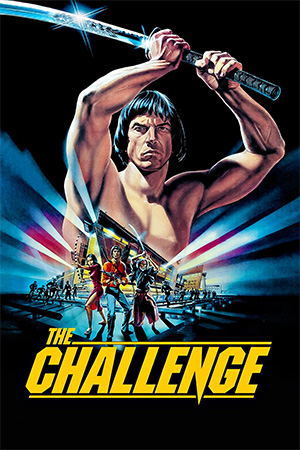 Criminally overlooked and underrated East meets West actioner that has some fine pedigree (John Frankenheimer, Toshiro Mifune, John Sayles), gave Scott Glenn one of his best leading roles and even introduced one Steven Seagal to the world of movies (albeit behind the camera). The film sees Glenn’s washed up boxer and bull-headed egotist, Rick, asked to transport a sacred sword back to Japan and into the safe hands of Toru Yoshida (Mifune). Compensated well, Rick stays at Toru’s Samurai school for a few days, soaking up the culture and often clashing with it. While residing there he is persuaded to steal the sword and bring it to Toru’s brother, Hideo, an evil and corrupt business man whom Toru has long been at feud with. Rick agrees but when he has the chance to hand over the sword to Hideo refuses and returns to Toru ashamed. However, Toru gives him another chance and accepts him into his school where Rick trains to become a fighter. Hideo stills wants the sword he believes is rightly his and mounts a campaign of violence against Toru and his school leading Rick and Toru to storm Hideo’s hi-tech hideout and put an end to the feud once and for all.

Brutal, ballsy and, yes, somewhat pulpy, ‘The Challenge’ is a corking martial arts thriller that sticks to its mean guns and is one of the most overlooked gems of 80s action cinema. Set primarily in Tokyo, Frankenhiemer infuses the film with Eastern culture as Glenn’s character warms to the country and its people, finding a place he feels accepted despite it initially feeling so alien. A great scene early on, shows Rick eating and drinking with the Samurai, up for the challenge of trying new food (despite it still being alive!) and drinking their alcohol. He becomes quite drunk and a little loud but rather than berate him, the noble warriors warm to Rick finding him funny and honest and not too dissimilar from themselves. A great scene that allows for a bit more characterization and understanding of a culture than is usually found in a pulpy action film. There are also some great training scenes (a pre-requisite with any martial arts/samurai film where the main character is learning the way of the warrior) including some cool stuff when Glenn is buried up to his neck in the ground for five days, often tormented by his fellow trainee’s.

In equal measure, there is violent and well executed action as Rick becomes more adept at fighting, taking on an ever increasing bevy of Hideo’s henchman. Much of the fighting was handled by Steven Seagal, here working on the action scenes behind the camera long before he took up “acting” in front of the camera. It certainly shows as the fights are fierce and full of brutal blocks and takedowns, much like in his own films. The film also has it fair share of sword wielding action and climaxes in a spectacular extended finale at Hideo’s compound, where Glenn and Atsuo Nakamura (who plays Hideo) have one heck of a fight. Great stuff. In addition, Glenn is his solid, gruff and rough self and Akira Kurosawa leading man Toshiro Mifune is great as Samurai sensei Toru. The script is sharp and full of bite, not ashamed of it pulpy roots, but with the likes of John Sayles (Lone Star, Matewan) contributing there is a human element ever present and the plot doesn’t always take the clichéd avenues one might expect. Also, look out for Kinji Fukasaku’s (director of ‘Battle Royale’) son in an early role as the boy who befriends Rick.

Certainly one of the better films of the 80s that dealt with Eastern culture seen through the eyes of a Westerner and a great action film as well, ‘The Challenge’ showed Frankenhimer’s skill at staging action and gave early starts to the likes of Glenn, Seagal and Sayles. Not always easy to come by and screaming out for a new, proper release ‘The Challenge’ is well worth hunting down.