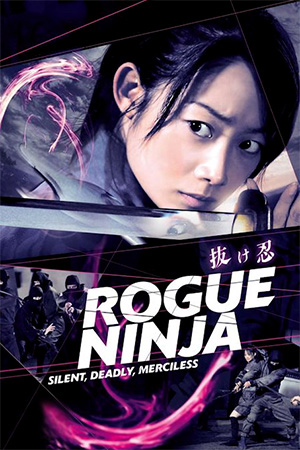 If you are looking for straight up, no frills, ninja-on-ninja action then you could do a lot worse than Seiji Chiba’s ‘Rogue Ninja’. Chiba has been steadily churning out entertaining low budget films many featuring some quality fight action. From scripting the likes of the awesome (and little seen) ‘Death Trance’ to writing and directing cult hit ‘Alien Vs Ninja’, Chiba puts the emphasis on fun. Appearing to utilize the same cast and re-use some of the same locations of ‘Alien Vs Ninja’, ‘Rogue Ninja’ may not feature any beasties from another world but is packed with some tremendous ninja fighting action.

In the 16th Century, Japan is ravaged by civil war with opposing ninja clans attempting to wipe one another out in order to be the ruling clan. The Iga clan is under threat from the nasty warlord Nobunaga Oda who is cutting an evil path across the land. However, he may have met his match in the form of female ninja Ukagami (Hijii) who despite receiving continuous (and unnecessary) flack from her male counterparts is a highly developed and lethal ninja. Hatching a plan to stop Nobunaga, she risks banishment from her clan but does so to stop the evil warlord and attempt the rescue one of her childhood friends caught in his evil grasp.

Despite being shot in what seems to be three locations (a cave, a feudal palace, and a never-ending forest) and on what must have been a miniscule budget, ‘Rogue Ninja’ is a whole heap of fight fun. At just over an hour long the flick moves fairly swiftly and switches from scenes of fight action to characters bumping into one another in the forest (to either talk or fight) continuously. Hijii makes for a lovely and convincing female ninja and holds her own in the impressive scenes of combat. The action scenes are fast and fluid and feature some nifty choreography as our heroine takes on hordes of ninja clad warriors brandishing swords, ninja stars and even Wolverine type claws at one point. Cool. Chiba can handle action well and heaps it on here, showing that you don’t need flashy editing or big budgets to deliver impressive kung fu action.

The drama may not be sold as well (and perhaps takes itself a little too seriously for what is essentially a fun fight film) but it’s never too long before the next fight and the villain is satisfyingly nasty and evil meaning there is a worthy adversary for our female hero. There is perhaps a little too many “no-female-should-be-a-ninja” and “when-are-you-going to-settle-down-and-have-kids,” type speeches (the whole no woman should be a ninja angle heaped on a little heavy) and there are some unnecessary misogynistic deviancies that detract from the overall fun. The more “sophisticated” of viewer/reviewer will no doubt wax lyrical about the “lack of plot” but this is missing the point as at just over an hour long and presumably made with money left over from ‘Alien Vs Ninja’, ‘Rogue Ninja’ is all about the ninja fight action fun which is delivers in spades and is all the more entertaining for it.