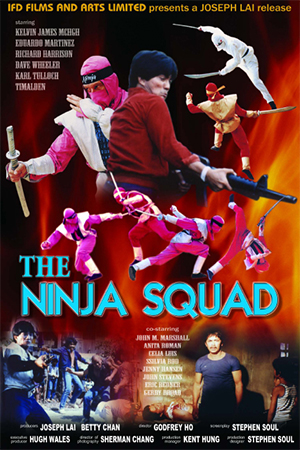 After finding myself surprisingly entertained by Godfrey Ho’s cut ‘n’ splice approach to filmmaking in ‘Ninja Terminator’, I thought I may as well dive head first back into the Richard Harrison exploitation era. ‘The Ninja Squad’ is once again made up of two completely different films, one of which uses a handful of Harrison to try and entice the international audience. Sadly though, this one doesn’t work quite so well.

Since he was a child, Billy has been training with the ninja master Gordon (Harrison), but has finally decided it is time to return home and be reunited with his family. Unfortunately, a power hungry ninja by the name of Ivan The Red is desperate to fight Gordon so begins assassinating all of the finest fighters throughout the Ninja Empire. Of course it isn’t long before he sets his sights on Billy, and with the help of a group of local thugs he murders his mother and kidnaps his sister. Now Billy must reveal his amazing fighting skills if he is to have any hope of keeping his sister alive.

Unlike the aforementioned ‘Ninja Terminator’, ‘The Ninja Squad’ is a much more transparent attempt at mixing together two completely different films. The majority of the running time is spent on a Taiwanese outing, and quite frankly it’s a poor excuse for a film by any standards. There really isn’t any reason to use the word ninja and the so-called storyline is just some vague rumblings about a group of local thugs. The actors used are also particularly bad and most of them hardly look heroic as they sport ridiculous facial hair and overhanging guts. Meanwhile, Richard Harrison and a handful of other ninjas (we know they are ninjas because they wear headbands with the word “Ninja” printed on them) occasionally pop-up to try and generate a little excitement, but it’s so obviously spliced in and short lived that it can do nothing to save the overall picture.

As for the action, this is pretty much on a par with the rest of the film and lacks anything worthy of the time investment. The sequences found in the “Billy and the thugs” section of the story are probably the worst offenders as the main actor clearly isn’t a very talented fighter and he just lunges at people with his body weight. The ninja duels are slightly better as they boast some decent acrobatics, but they don’t last very long and look to be obviously staged. It’s also odd that the horrible Ivan The Red dispatches of the majority of his opponents using a presumably sharp sword, yet none of them ever seem to bleed. Come on Mr. Ho, couldn’t you have at least invested a little cash in some tomato ketchup?

Aside from a rather funky soundtrack, there really isn’t much to recommend in ‘The Ninja Squad’. The main storyline is just completely beyond redemption and even a typically bad English dub mixed with a handful of ninja antics can do little to save it.