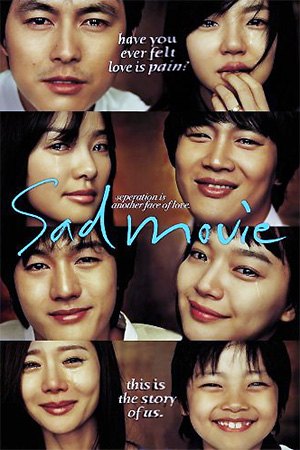 By its very title, ‘Sad Movie’ seeks to put itself above the pantheon of tear-jerkers produced by Korean in the past decade. As this is a genre that Asia has often excelled in, such a bold claim has to have the emotional impetus during the film to back its name and director Kwon Jong-Kwan goes all out to achieve this.

‘Sad Movie’ focuses on a series of vignettes all intertwined by the character of Jung Ha-Suk (Cha Tae Hyun), a young dreamer who is told in no uncertain terms to sort his meandering life out by his disillusioned girlfriend. After setting out to maintain some stability in his life, Jung is approached by a young woman who pays him to tell her boyfriend that she no longer wants to continue the relationship. This bizarre situation then gives Jung the idea of turning the incident into a lucrative business: the delivery of break-up messages to the unwanted partners. Meanwhile, the woman who first hired him to do her dirty work is troubled when her ex-boyfriend is caught in a terrible blaze during his work as a fireman. Deep down all she wants is to be with him, but fears that his high risk job will make her a widow before they have any time to really be a married couple. Her deaf sister is also finding love difficult to appreciate as her work in a theme park brings her into close proximity with a handsome artist. Due to a scar she has and her difficulty communicating, the young woman finds herself using the outlandish costume she wears at work to connect with him. Communication is also a stumbling block for a mother who cherishes her unruly son, but finds it challenging to reach his heart. As Jung befriends the son, the mother has an accident that puts her in hospital for a considerable period of time yet enables her to finally get to know him. Though mother and son piece together their relationship, Jung is called into service to deliver a message after a tragic revelation.

Four inter-linked stories using a central pivot may not be anything revolutionary in terms of narrative construction, but it eschews the traditional way of presenting a romantic drama. Such a step ensures the emotional intensity intended to make this the ultimate ‘sad movie’ though it also leaves itself open to problems. As I often remark, the difficulty of using this portmanteau technique is the tendency to concentrate on the stronger stories and leave the weaker episodes to their own devices, creating an obvious imbalance overall. ‘Sad Movie’ suffers the same fate with a mixture of heart-rending drama and disappointing bathos.

Kwon Jong-Kwan certainly knows how to use familiar techniques and twists to capture the audience’s attention, even if he also strays into moments of obvious emotional manipulation. When it’s good though, ‘Sad Movie’ is a production of notable quality that features a few immensely moving moments. The close of each of the stories has a affecting caveat that emphasises the central theme of love, whether that be applied in a romantic or filial way. The story that revolves around the mother and son has an especially uncompromising ending, full of clichéd machinations but no less powerful because of it. without giving too much away, one of the other sub-plots rivals this in terms of intensity and therefore makes the title a very appropriate one indeed.

The glaring problem with two such strong endings is the effect they have on the others. When issues of mortality are discussed, they come to dominate the film and add some needed weight to a narrative that often meanders. Naturally this makes the more trivial storylines – i.e. the syrupy romance between an artist and his theme park muse – even less palatable and their conclusions hard to empathise with. To juxtapose the vignettes that deal with death and loss with the Disneyfied moments becomes more and more uncomfortable as the film progresses. This is further emphasised by a few excellent scenes that lift this production out of the bustling genre crowd; the moment when the son discovers the personal diaries of his sickly mother is effortlessly moving and lingers long after the final frames.

‘Sad Movie’ is professionally executed with slick, expertly-lit photography and that Korean ability to use common emotional triggers without being quite so conniving as expected. Yet its smooth commercialism is often awkward, cramming in some horrendous product placement for ‘Yakult’ and a desperate desire to please everyone. There are moments that do bring a tear to the eye, justifying the title and leaving its desired impression. However, Korean cinema is so skilled in this genre that it takes a work that is consistently gripping and ultimately rewarding to separate it from its contemporaries. ‘Sad Movie’ is more than just competent, but it never ascends to the dizzy heights mentioned.