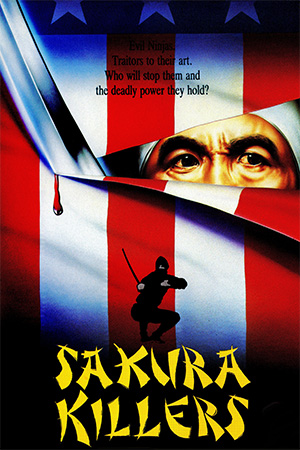 Woah, this is a load of cheap-jack, full-throttle, ninja-madness fun: Sakura Killers where have you been all my life?! Silly to the extreme but packed with loads of awesome ninja action, ‘Sakura Killers’ is 80s to the max, most likely a cut-and-paste job (and apparently, it’s still unclear/debated about who actually made the film!!) but damn if it ain’t some sweet, sweet ninja sauce.

Some badass ninjas from the Sakura clan steal a video tape containing some sort of secret/powerful/destructive formula, intending to sell to the Russians. So, it’s up to top level US government man Chuck Conners to stop them by sending in his two top agents, Sonny (Kelly) and, err, Dennis (Nicholas). These two travel to Taiwan, where the Sakura are based, and train in the art of ninja in order to defeat them. It’s then training montages and ninja-a-go-go madness from there on out!

Where to start with the crazy goodness of ‘Sakura Killers’? The “incredible” acting? The bonkers “plot”? Chuck Conners complete with Brooklyn branded garb (so we know he’s American!) and never-off-his-face shades running the whole operation from his ranch in the middle of who-knows-where? Or the awesome ninja action? Let’s stick with the awesome ninja action as that’s why we’re here. While the two leads seem to mangle their way through their lines, they more than make up for it with their kick-ass ninja action skills. The film packs in a load of awesome ninja-based shenanigans from the get-go: complete with ace gadgets, scaling tall buildings, tunnelling beneath the ground and come the finale, a genuinely well-staged and sustained swordfight!

While the whole story and most of the acting is goofy-as-hell there’s no doubting the fun ‘Sakura Killers’ delivers, along with all the great ninja busting. Well, I’m sure the overly critical/can’t-just-have-fun-with-a-flick crowd will tear it apart but ‘Sakura Killers’ is from a time (the golden 80s!) when flicks just went for broke and packed as much crazy in as they could. It may not be a good film, but ‘Sakura Killers’ is a straight-up legit ninja movie, and sometimes that’s all you need: ninjas, ninjaing!