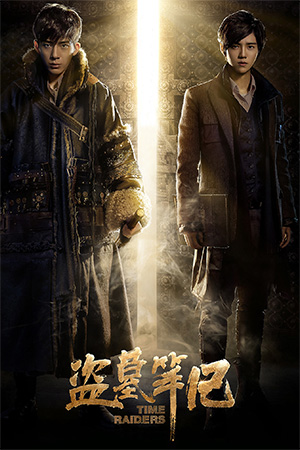 Wu Xie is the boyish-looking owner of a crumbling antique shop who also has a neat sideline as a tomb raider due to his famous family line in the trade. When a struggling writer starts to talk to him, Wu talks about his first great adventure with his seasoned uncle and his extended family of adventurers. Although his companions are focused on the money, Wu is fascinated with Chinese history and so, when his family get hold of a strange bronze object that acts as a rudimentary time piece, Wu links all of this to the legend of the lost kingdom Xiwangmu. Wu and his family are not the only ones focused on the mythical citadel though; an elderly European megalomaniac who has long coveted Xiwangmu is also on the trail and sends out a team of assassins in pursuit.

Based on an online novel series, ‘Time Raiders’ is the kind of big budget, computer effect drenched adventure flick that Hollywood may have been doing for quite a while, but China are keen to take a slice of too. Photogenic stars, impressive sets and increasingly intricate action show the intention behind Daniel Lee’s summer hit – it’s ‘Armour of God’ for the 21st century. Yet while the budget is clearly seen on screen so are the numerous obvious weaknesses that detract from the overall effect.

‘Time Raiders’ starts slowly and increases the chaos as the running time elapses. Unfortunately, as the action gets more elaborate, just as the momentum gets going, the most glaring weakness becomes apparent. While ‘Time Raiders’ starts with competent special effects it descends to a level of incompetence that makes ‘Sharknado’ look cutting edge. It doesn’t seem to make any sense as the disparity between a few computerised moments at the beginning and the insipid, ridiculous climax is so vast that it could almost be two separate movies. The scenes of the Serpent Queen utilising her snake appendages is unintentionally amusing as is the appearance of a legion of worms slithering up hill to rule the world with all the graphical quality of an old NES game.

While ‘Time Raiders’ is a weakened by the technical aspects of the film, the action scenes that are reliant on good old fisticuffs are significantly better. A few decent bouts and well designed sequences make the special effects easy to forget about for a moment and are a reminder of the big advantage Chinese cinema still could have over its American counterpart.

It’s not that ‘Time Raiders’ is a bad film – it is surprisingly entertaining given its shoddy construction and shaky storytelling. Nevertheless, it’s a reminder that Chinese cinema is far behind Hollywood in some departments despite its desperation to mimic it. The message is clear: spend as much money as you want on a film, but without care and craft it is unlikely to succeed. Let’s hope something will be learnt from the experience.