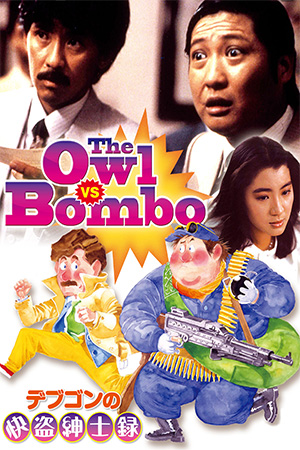 The Owl (Lam) is a suave and sly criminal who uses various confidence tricks to get by in life. After pulling off a major trick on a notorious gangster, The Owl decides to keep a low profile and retire from the hectic life of crime that he’s become accustomed to. At the same time, Bombo (Hung) – a short-tempered, yet fairly harmless robber – also decides to leave the underworld and keep his head down. Their quiet lives are suddenly turned upside down though when a disgraced police officer decides to blackmail them into helping him in a series of challenges. Firstly the two are forced to help out at a local Youth Probation centre where the juveniles are sure to give them a very hard time. Then their mysterious blackmailer also uses them to keep a close eye on a corrupt land-developer who has made a fool of the law once too often. Both tasks seem unbearable but the two are reminded constantly of the incriminating evidence that has stacked up against their past lives.

Things take a turn for the better when The Owl and Bombo both begin to find love in the unlikely setting of the Youth Probation centre; The Owl has his eyes fixed on a pretty young teacher while Bombo befriends one of the centre’s organisers. The pair also begin to make some progress with their students as the former delinquents warm to the genuine empathy that these two new teachers offer. This, however, leaves them with an even harder task to complete their mission: bringing to justice the corrupt land-developer. While searching for a way to do this, they also discover who the shady blackmailer is and the reason behind his scheme. In an eventful final reel, The Owl and Bombo agree to finish their assignment and come face-to-face with the villainous hordes.

‘The Owl Vs Bombo’ is one of Sammo’s forgotten works as director. This is, in some ways, unfair as the film is a good 100 minute mixture of comedy and (minimal) action. It’s true that when compared with films such as ‘Pedicab Driver’ this severely pales in comparison, but so do many other acceptable Sammo vehicles. ‘The Owl Vs Bombo’ features some good action at certain points of the film, but is mainly a comedy and this should be remembered on starting to watch the film. The humour of the film often raises a smile as Sammo continues to impress as the hapless everyman who, although a master fighter, is found wanting in relation to the opposite sex. Sammo’s hard-nosed fight skills against Dick Wei at the film’s conclusion is in stark contrast to his lovable innocence as he romances the always-dependable Deanie Ip. One noteworthy plus point of this particular film is the young actors who play the various members of the probation centre; some give quite touching performances in their odd glimpses to shine. This unusual advantage means that the little drama that is in the film is well-acted and quite effective.

While not offering the very finest of Sammo’s work, ‘The Owl Vs Bombo’ is an entertaining and worthwhile slice of 80’s Hong Kong cinema. The action is perhaps too brief and the comedy doesn’t always amuse, but there are certainly worse films to spend time watching.