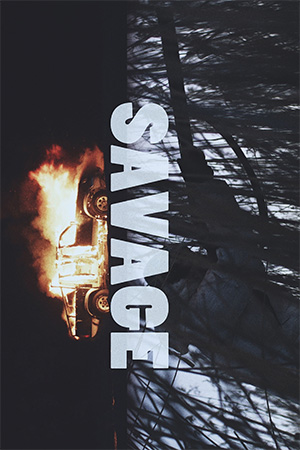 Harsh and downbeat thriller set in the snowy Chinese wilderness; ‘Savage’ pulls few punches in its tough tale of a mountain cop on a quest to extract revenge on a trio of criminals who killed his partner. Said criminals rob an armoured truck full of gold bullion and in the process slay Wang Kanghao’s (Chang Chen) partner. Absconding into the wilderness that surrounds Baekdu Mountain the crooks hide the gold to retrieve at a later date. Kanghao waits patiently to take revenge and gets his chance when he discovers the loot and that the crooks have come to collect. However, vengeance does not come easy, especially in a remote wilderness beset by a blizzard and criminals who are determined to claim the gold no matter the cost to human life.

Directorial debut of screenwriter Cui Siwei (‘Bleeding Steel’, ‘The Island’), ‘Savage’ is a confident first stab in the director’s chair that despite perhaps being a little overcooked (and cliched) on occasion, delivers tough thriller thrills. With its unique and eye searing setting, ‘Savage’ is harsh from the get-go, as the characters must do battle with their surroundings as much as they do with one another. All shot on glorious location, the setting is beautiful and brutal with Cui Siwei making sure we the viewer feel the cold and harshness as much as the characters do. One gets the feeling this was a tough film to make, and it vividly comes through the screen to give added grit.

The cast commit too, going all in to do battle with the elements, quests for revenge and themselves. This leads to some particularly vicious villains and an almost sense of hopelessness as no matter how hard they fight the elements and one another, things are never going to turn out well. For the most part, the film stays on a gripping track punctuated by several fierce set-pieces full of shotgun blast and bloody injury. The opening attack on the gold truck is tensely staged also but the taught grip wanders somewhat in the second half due to too many characters clogging up events, a running time that stretches a streamlined plot (thus deadening some of the tension), and a few cliched elements that are somewhat at odds with a unique narrative.

Still, with its striking visual element, some impressive action, and a commitment to a stark aesthetic, ‘Savage’ manages to be a taught thriller that avoids the trap falls of melodrama, to deliver grit and thrills.