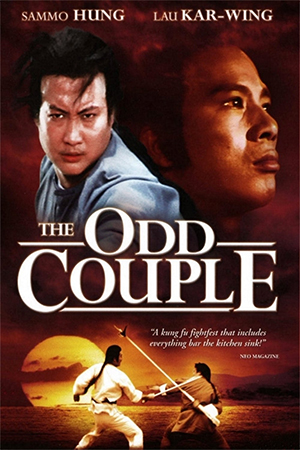 Whereas Liu Chia Liang rightfully ranks as one of the best directors in Hong Kong cinema and Liu Chia Hui remains a well-loved cult star all over the world, Lau Kar-Wing often becomes the forgotten man. Every keen-eyed viewer will remember his performances in such films as ‘Legendary Weapons Of Kung Fu’ and ‘My Lucky Stars’, but his contributions as a choreographer and director remain over-looked. ‘Odd Couple’ gave him the chance to create the kind of action-packed blend that was usually reserved for his older brother.

The premise is initially a very simple one: every ten years, two kung-fu masters – one proficient with the sword (Sammo), the other with the spear (Liu) – contest a duel to decide who is the best. After their countless duels all end in draws and the masters must both admit that the aging process is taking effect, they decide that it’s time to each take a student to further the rivalry. In the film’s very clever twist, Sammo’s trainee is played by Lau Kar-Wing and vice versa, allowing for some good scenes between the two. These new novices are put through the highly-disciplined training of their respective teachers until they have achieved a competent level of skill. Before their first battle, however, a more important issue comes to light; the return of an old foe who was once defeated by both of the elderly experts. The foe comes back looking for revenge and, because of their flat refusal to team up together, the two are killed in a heated confrontation. The mantle of justice is now handed to the pupils who agree that the only way to overcome this adversary is to combine their respective talents. Putting into action the wisdom that their teachers denegraded, the new keepers of the sword and spear are ready to exact suitable revenge.

‘Odd Couple’ has accumulated a formidable reputation over the past few years as more and more fans begin to look at Sammo Hung’s back catalogue. Some have asserted that it is one of the best traditional weapons films ever made and should be appreciated as a masterpiece. The truth is that for all the merits of ‘Odd Couple’ it still lacks that special something that makes a very good film a classic. The performances are all up to the usual high standard expected of the stars and the action is superb, but there still seems to be a lack of spark about the production. The revenge sub-plot that appears at the end and acts as the catalyst for the finale does appear to be shoe-horned in, taking away some of the film’s cohesion. However, anyone searching for a traditional kung-fu flick that is filled with sublime choreography need look no further than this; the intricate sword and spear clashes are worth 90 minutes of anyone’s time. Therefore, although ‘Odd Couple’ is not the cream of the crop, it is still a film that Sammo Hung and especially Sammo Hung can be proud of.