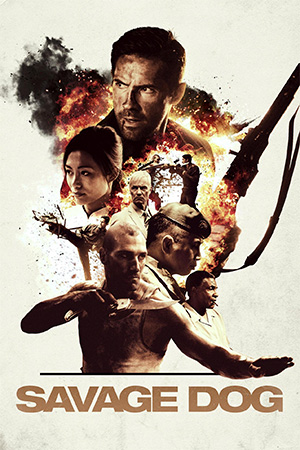 Bloody action a-go-go in Jesse Johnson’s period set ‘Savage Dog’ which sees him re-team with can-do-no-wrong action star Scott Adkins, the pair having previously worked together on ‘Pit Fighter’. Set in Indochina circa 1959, Adkins plays Tillman, a former boxer doing time in a work camp under the rule of former nasty Nazi Steiner (Kulich). Forced to fight for the amusement of Steiner and his goons, Tillman is the champion of the work camp pit fights. When he’s unexpectedly released from the prison (owing to his dodgy past catching up to him and the possible exposing of Steiner’s corrupt camp!), Tillman attempts to go on the straight and narrow taking a job as a bouncer in the local bar run by the always dependable Keith David (‘They Live’). However, with said dodgy past hot on his heels and Steiner not one to want to let go of his money making fight champion, violence soon destroys Tillman’s seemingly tranquil life leading him to take all out bloody revenge on his former captor and said goons.

Though somewhat convoluted in it’s a set up and with an unnecessary sub-plot of an agent tracking Tillman down for past crimes (though it’s nice to see Mathew Marsden pop up as said agent!), once ‘Savage Dog’ gets going it’s an often unrelenting barrage of violence and revenge soaked action. Though before the kick ass action takes over, there is a lot more to like about Johnson’s bloody revenger. The period setting is a nice change pace, the supporting cast is populated with some solid action movie stalwarts (Marko Zaror, Cung Le) and the likes of Vladimir Kulich and Keith David bring some meaty gravitas to proceedings. David is on especially likeable form as Tillman’s boss come buddy, his easy going charm providing some much needed relief from all the bloodletting and his rich narration adding some pulpy charm.

A pulpy period actioner is a good way to describe ‘Savage Dog’ but come the second half, the film veers into full on exploitation madness as the violence is ramped up. While the first half focuses on Tillman’s bare knuckle fights the second half goes into action overload with painful machete fights, extensive gunplay and all-out fight action. Heads and limbs are severed, bodies ripped apart by bullets and blood literally gushes from slain henchman, Johnson not holding back in the violent action department. It borders on grindhouse excessiveness at times but the action is nevertheless excitingly staged and copious. Adkins proves once again he’s one of the best screen fighters and action stars around (and gets to mix up his usual acrobatic fight style with some gunplay and bare knuckle boxing) and also gets to cut loose mano-a-mano with both Cung Le and Mark Zaror in two blistering fights scenes.

Sure it’s a little rough around edges, maybe tries to pack in one-two many characters and the excessive gore may be off-putting to some but as a period actioner, ‘Savage Dog’ delivers the old school combat goods.