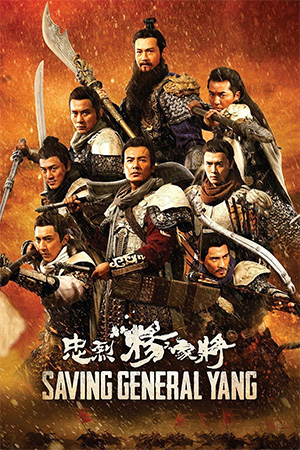 Ronny Yu’s action epic, set during the Song Dynasty, sees General Yang (Adam Cheng) leading his loyal soldiers against the mighty Khitan: a rampaging army lead by the vengeance seeking Bayan (Bing Shao). Bayan is looking for revenge on Yang, and his seven sons, for an indiscretion many years prior. Slaughtering Yang’s men with apparent ease and wounding the General in the process, Bayan traps Yang and his surviving soldiers in a deserted desert city. The seven sons then set out to rescue their captive father and while they come to his aid rather quickly, getting their wounded father home and out running Bayan’s ruthless killers may not be achievable as the brother’s face insurmountable odds to get their father to safety.

Yu’s epic is often stunning to look at, is a lot less stuffy and longwinded than many a recent Chinese period epic, moves at a fair clip (sometimes a little too fast, as the narrative crux is set up and established at a rapid pace!) and delivers a surfeit of adrenaline surged spectacle. At just under an hour and forty minutes, ‘Saving General Yang’ is a lot less drawn out than many recent films of similar ilk which is both a benefit and a detriment. As mentioned, the initial set-up (warring factions, General needs saving) is all rushed through and established fairly quickly. Not necessarily a bad thing as proceedings are still easy to follow, make sense and in no time the sons have found their father and are beginning their perilous journey home.  This means that deep and rich characterization that critics of an overly, well, critical nature like/demand is somewhat lacking in the seven brothers (other than Ekin Cheng’s eldest brother, they are all a tad interchangeable) as the story is more concerned with the dangerous plight the family must make back to safety.

However, this does give Yu’s film a refreshingly supercharged momentum as the brothers fight wave after wave of Bayan’s men. Despite an initial splash of dodgy CGI, the action really soars and Yu and action maestro Wei Tung (‘The Blade’, ‘Seven Swords’) craft some exhilarating sequences of combat. From an arrow fight in a field of tall grass, to one of the brothers taking on the marauding army singlehandedly to an impressively staged sequence where the group find themselves fighting their way out of the desert compound while attempting to dodge catapulted boulders: it’s worth watching the film just for this bravura sequence.

In addition, the desert locations are visually pleasing and Adam Cheng as the needs-to-be-rescued General is on fine form as the honourable patriarch. ‘Saving General Yang’ works best as blockbusting period action and while not as accomplished as say some of Yu’s previous films (‘Bride with White Hair’, ‘Fearless’) is nevertheless a great showcase for some spectacular action and shows that Hong Kong period films can be exhilarating and entertaining as well as serious and worthy.