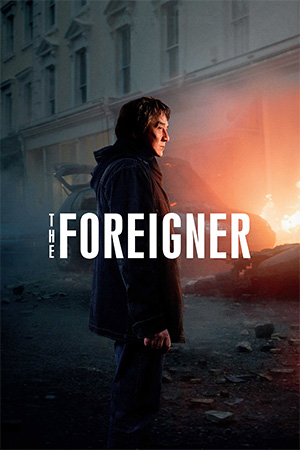 Barnstorming politically charged thriller bolstered by some exhilarating action sees Chan, Brosnan and director Martin Campbell on top form, with ‘The Foreigner’ being one of the best films all three have delivered in some years. Chan is Quan a seemingly humble restaurant owner in London living his life quietly until it is rocked by a bomb detonating, killing his daughter. His life is shattered and he is determined to find out who the terrorists are no matter the cost. His quest leads him to Irish Deputy Minister Hennessy (Brosnan) who Quan believes knows who the terrorists are and may have links to them from his old IRA days. Hennessy meanwhile protests his innocence in the matter and thinking Quan can be easily brushed under the carpet finds himself in an increasingly hostile situation as Quan’s past and deadly skills come to light in a battle of violent and explosive wills.

Classy, tense, complex and delivering some fine tuned action scenes: ‘The Foreigner’ is a well crafted film that gives Chan one of his best roles. He’s fantastic here as a world weary citizen with a hidden past who after many years has to use his particular set of skills to set things right. Chan plays it subtle but strong, quietly emotional when his character is suffering yet able to strike with fury when the situation calls for it. He plays to his age, often looking tired and battered but is still able to perform exhilarating stunts and fight action. It’s a great performance and appears to be one Chan has been waiting a while for and gives it his all. He’s backed by an on-form Brosnan who, here re-teaming with his ‘Goldeneye’ director, gets to sink his teeth into the meaty role of a man whose life is rapidly unravelling. He gets some big moments with hefty reams of dialogue but never over does it keeping it the right side of grand standing. Kudos also to Campbell for delivering a tightly controlled thriller that is far more complex than the trailers suggest, delivering a picture that melds it’s narrative, actors, action and score (by the great Cliff Martinez) into a slick and heady mix.

The action, as expected from Chan, is stellar and mercifully short on CGI and nonsensical editing enhancement meaning we get clear cut, short and sharp, thrilling action. Some may be dismayed that the film isn’t as saturated with action as the trailers suggest but this works in the film’s favour. Proceedings build to the action (it’s well over half an hour before the first action/fight scene occurs) as the narrative drip feeds Quan’s skills and past meaning tension is built and sustained. This allows Chan the opportunity to do something a little different with this film, no hi-jinks, building on his more serious work seen in the likes of ‘Crime Story’ and ‘Police Story 2013’.

It may take itself a little too seriously on occasion with dramatics almost pushing into soap opera territory and Chan is maybe sidelined a little too much in the second half but on the whole this is a smart and serious adult action thriller of the type you don’t see that often these days.