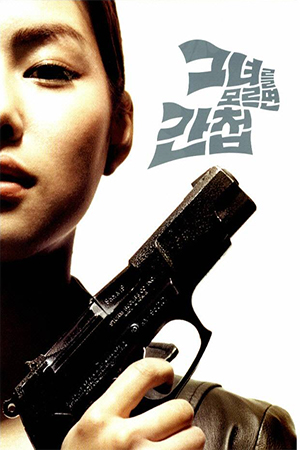 The spectre of ‘My Sassy Girl’ floats above every Korean rom-com-dram since it’s hugely successful release, pretty much dictating the pace and mood of various parts of the narrative. This has been both a blessing and a malediction as there have been some enjoyable clones of the aforementioned hit and quite a few pale imitations. ‘Spy Girl’ follows the format of ‘My Sassy Girl’ judiciously, but has its own qualities to turn to as well.

Dopey Korean student Ko-Bong is desperate to meet the right girl, but finds the task impossible due to his complete lack of street cred and general lethargy. His two equally clueless friends take pity on him and decide to introduce him to ‘Angel No.1’ – a girl who heads the charts on their internet site of local beauties. The ensuing date is an unmitigated disaster and the bewildered Ko-Bong drowns his sorrows, only to be set upon by local thugs in the process. Suddenly a caped woman enters the fray, saves Ko-Bong and inadvertently leaves the dazed student lovestruck for his bewitching saviour. When the same woman then ends up working at Ko-Bong’s local ‘Burger King’ and then becomes the new ‘Angel No.1’, he resolves to win her affections. Unbeknownst to him, the stranger is in fact a North Korean spy who has sneaked across the border to capture a rogue spy who has run off with Party money.

‘Spy Girl’ follows the template set in stone by the success of ‘My Sassy Girl’: a quirky, energetic opening where the dim-witted ‘hero’ meets the mysterious stranger, then the switch to a tentative friendship between the two and a closing third that veers into drama. Such jarring tones are not nearly as incongruous as they sound, but some familiarity with the inspiration is needed to really appreciate the entertainment value of ‘Spy Girl’. This uniquely Korean vibe is proudly exhibited by Park Han-Jun who, rather the rebel against the ‘My Sassy Girl’ pretenders, warmly embraces their ideals and yet tries to carve out its own niche. The resulting picture is patchy and a tad overlong – something it has in common with its inspiration – but it manages to gratify for the majority of its duration.

Though the lead character and his various cohorts are difficult to warm to at first, Park Han-Jun manages to make him an object of sympathy rather than just an oafish student desperate to impress. This is achieved by showing instances where Ko-Bong is, at heart, just a tender-hearted soul who remains very different from his two juvenile sidekicks, a fact that is emphasised throughout the latter part of the film. Ko-Bong’s cautious friendship with the lionised Hyo-Jin is lovingly detailed and we see our heroine go from single-minded spy to lovestruck victim. When the drama takes the focal point, both characters grow and the unrequited love of Ko-Bong is given an underlying layer of pathos. Such a change of tone is at odds with the frivolity and broad comedy of the opening thirty minutes, but the shift just about works because of our growing affection for the lead pair.

‘Spy Girl’ is broad, then at times subtle while also throwing together slapstick and satire in an interesting blend. Though the earlier humour is somewhat forced, the latter stabs at satire add an interesting Korean perspective on the narrative. The examination of North/South tensions are never going to be too insightful in a comedy of this nature, but the sight of Hyo-Jin’s apathetic fellow spies living the capitalist ‘dream’ by selling fast food is an even-handed dig at both cultures. Such moments may offer something a little different for the ‘My Sassy Girl’ fans who have seen absolutely every clone of their favourite hit, while being relatively charming for those who are uninitiated in this very-Korean sub-genre.