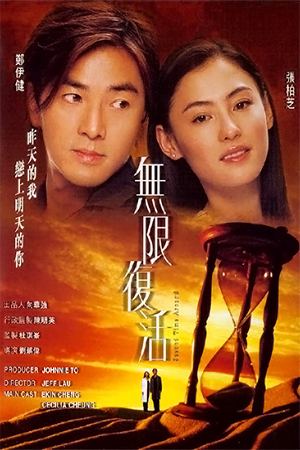 Time-travel and the numerous fictional possibilities it raises has long been a useful narrative device for writers and film-makers. The difficulty that it always has to conquer is the inherent trap of creating an obvious paradox, something which some viewers are more than happy to point out. Even the very best of these films cannot stop this inevitable mistake and so it is natural that the ‘Second Time Around’ still succumbs to this. This, however, proves to be the least of the reasons as to why this fails to to fulfil its intentions.

Gambling addict and general deadbeat Ren persuades his loyal friend Sing to accompany him to Las Vegas with a considerable stash of dirty money. After a brief period of success and significant winnings, Ren manages to lose everything in a final bet with the house and goes away to drown his sorrows with the disgruntled Sing. When the pair accept a lift back to L.A. from a businesswoman who has befriended them, matters turn to a far more extraordinary series of events. Firstly, a car crash claims the life of all but Ren and the gambler is left in a coma at the local hospital. More unusual though is the sudden realisation that, due to a gift given to him, he manages to leap back in time, creating a parallel reality. Now teaming with a law enforcement officer, the bewildered time-traveller goes back to Las Vegas and discover how his friend was killed. However, with a split in reality and two versions of him roaming around, Ren finds out some surprising answers.

The first thing to state about ‘Second Time Around’ is that it is admirable to see a Hong Kong production moving into virtually unchartered territory. Science fiction films rarely make much of a mark in the local industry and so Jeff Lau should be commended for his attempt to tackle a thorny genre. Importantly, it is these elements that are by far the most entertaining of the film, though they are sadly not in the minority. Too much of ‘Second Time Around’ concentrates on the undeveloped romance between the lead stars and the tired gambling routines. Neither of these two plot threads are that interesting and neither is enjoyable as the time-travel story. What doesn’t help is the fact that Ren is not an especially sympathetic hero; his dead-beat style and willingness to gamble everything makes him a very uninvolving character. When the focus is on the more interesting science fiction narrative, director Lau succeeds in throwing in some surprising touches; the observant viewer will be rewarded by a few particularly fine time twists. Otherwise this is a standard big budget Hong Kong film that promises thrills, but rarely delivers them.