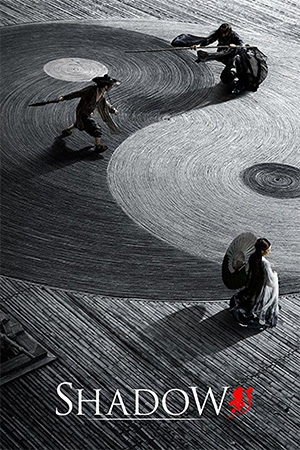 Zhang Yimou’s black, white and blood red opus mixes political intrigue, wuxia action and enough twists and turns to fill several mysteries. Always gorgeous to look at, what it lacks in emotional resonance it makes up for with visual splendour. During the Three Kingdoms reign, two once ally kingdoms are now at odds over a strategic city. Once the city of the kingdom of Pei, an in hiding and ill of health Pei war commander plots to take the city back by using a body double, his shadow. Training his shadow for an epic duel with the ruling kingdom’s commander, he plans an invasion of the city while they fight. However, the ill commanders’ wife and his shadow soon develop feelings for one another jeopardising the mission and send the plot to re-capture the city on an ever more dangerous course.

As is to be expected with Zhang, the visual mastery on show in ‘Shadow’ is second to none, masterfully using the tones of black and white to create a unique world. From ‘Raise the Red Lantern’ to ‘Hero’ to ‘Curse of the Golden Flower’, Zhang has created some of the most visually striking films and ‘Shadow’ can stand alongside ‘Hero’ and ‘Flower’ as another visual spectacle, as well as another showcase at Zhang’s gift for mounting incredible martial arts battles. While it takes some time for the action to arrive once it does, it’s incredible. The attacking kingdom utilise an umbrella weapon made of blades to fight, which leads to some eye-popping confrontations and set-pieces that creatively use the weapon for combat. Not least the bravura set-piece when the city attacking soldiers transform the weapon into a makeshift sled/shield (!) to navigate through the cobbled streets, taking out hundreds of enemy soldiers as they go. It’s an incredible sequence and marks a distinctive tonal shift around the halfway mark.

While the action and visual design are top notch the story and its characters unfortunately suffer somewhat. With Shakespearean overtones, the first hour is dedicated to establishing the characters, and their plans to take back the city. No bad thing in theory but unfortunately it all comes off as a little too dry and melodramatic. There’s no sense of urgency and despite a game cast it’s hard to invest in the characters and their motivations. While the film always looks beautiful and is meticulously staged there is just little sense of tension. Some may appreciate the play like structure of the first half and while it can often be a benefit for the narrative to build to action and spectacle, the drama beforehand at least needs to be engaging. When the spectacle/storming of the city does arrive, ‘Shadow’ almost morphs into a different film with Zhang staging some impressive sequences. The blood also starts to flow, the violence ramping up and come the twist happy finale, everyone is pretty much covered in the red stuff and we’re a million miles away from the slow burn first half.

Unfortunately, ‘Shadow’ is somewhat of a mixed bag. Beautiful to look at, exhilarating in parts but overall a little hollow. It may be lame to admit, but this reviewer had more fun with Zhang’s lesser loved previous films ‘Curse of the Golden Flower’ and ‘The Great Wall’.