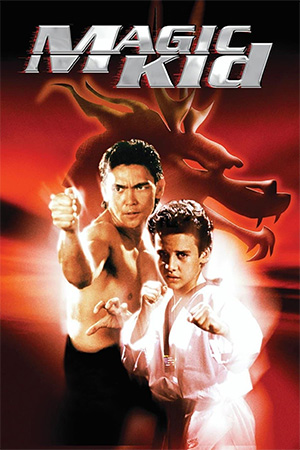 ‘Magic Kid’, or ‘Ninja Dragons’ as it was known back then, first came to my attention in 1993 when it was heavily previewed in a magazine called ‘Martial Arts Movies’. At the time, I was around the same age as its main star so I certainly appreciated the idea of a young martial artist being given centre stage. When I finally got around to seeing the movie, I recall enjoying it to a certain degree and it did enough to retain a slot in my ever-decreasing memory. After recently discovering the DVD sitting in a bargain bin, I decided to give it a re-watch to see if it could reignite some of the magic in this big kid.

When Kevin Ryan (Roberts), a 13-year-old Black Belt, and his sister go to California to visit their Uncle Bob (Furst), they soon discover that he is a fast-talking, second-rate alcoholic movie agent who owes big bucks to a mob boss. As several heavies come knocking on their door, Kevin makes good use of his fighting skills and they lead the bumbling bad guys on a high-speed chase throughout the city of Los Angeles. However, it isn’t long before the hapless trio find themselves trapped in a corner, but just when everything seems lost they are rescued by his idol, and holder of ten World Kickboxing titles (can you tell that part came from the box?), Don “The Dragon” Wilson, making all of Kevin’s dreams come true.

‘Magic Kid’ is a low budget family affair that borrows heavily from the likes of ‘Home Alone’ and ‘The Karate Kid’. Unfortunately though, it’s nowhere near as original or entertaining as either outing and the movie always feels blatantly cheap. All of the characters and dialogue are incredibly clichéd, with some hideous stereotypes that are enough to make even Walt Disney blush. The majority of the comedy also regularly misses the mark and most of the jokes are so bad that you’ll be wondering if they were lifted right out of a Christmas cracker. Perhaps strangest of all though, is the fact that the film is clearly intended as an homage to B-movie star and kickboxing world champion Don “The Dragon” Wilson. While Wilson certainly had a small niche following, he was a relative unknown to children and you could hardly say his talents were worthy of this kind of tribute.

As for the acting, it’s pretty poor to say the least and most of the actors blatantly seem to be reading from cue cards. Leading star Ted Jan Roberts certainly doesn’t feel like a natural actor, and spends way too much time sporting a ridiculously unthreatening scowl and trying to emulate the Roger Moore eyebrow trick. Similarly, his on-screen sister played by Shonda Whipple is equally unappealing, as she is not only incredibly annoying, but is also nowhere near as attractive as all of the characters make her out to be. As for Steven Furst, we all know he was once a fairly well respected comedian who appeared in genuinely funny films such as ‘Animal House’ and ‘The Dream Team’. How on earth he ended up spouting such poor material and kowtowing to a 13-year-old kid is a mystery that only his agent is capable of solving.

The fight scenes in ‘Magic Kid’ were choreographed by Art Camacho, the man behind movies such as ‘Bloodfist IV’ and ‘Ring Of Fire 2’. As with his previous outings, his take on the combat here is pretty basic and most of the fights are made up of poorly edited together one-two kicking combinations. Roberts doesn’t exactly help matters either, as he seems to have a very limited repertoire of moves and he is blatantly doubled for the bigger action scenes. It also has to be said that he is a pretty skinny kid, and it’s often hard to believe that he could do this much damage to a muscle-bound adult twice his size.

While it may still deliver a few fond childhood memories, ‘Magic Kid’ is a tough movie to recommend. The film is really just a blatant rip-off of bigger, better movies and the majority of the martial arts action is simply laughable.