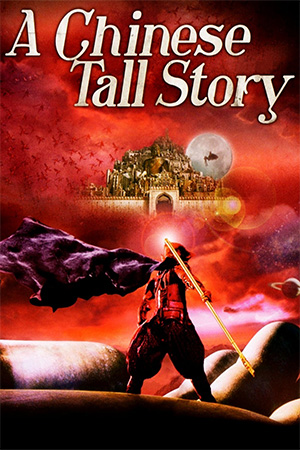 Over the years, audiences around the world have been lucky enough to experience the magical adventures from the ‘Journey To The West’ novel bought to life through the use of film, television and stage musicals.  However, this widespread success has meant that the story has now reached a point where it has become so well known that it is often difficult for any filmmaker to create fresh material based around the subject.  Of course, that is until Jeff Lau conjured up ‘A Chinese Tall Story’ which takes all of the familiar elements, mixes them up in a psychedelic haze and spits them out in a whole new manner.

The Tang monk Tripitaka (Tse) and his three disciples – Monkey King, Pigsy and the Sand monk – have travelled the length of the globe in search of the scriptures that are rumoured to bring peace to the world.  Their long journey leads them to Shache City which is rumoured to house the scriptures but before they can get their hands on them they are attacked by the “Root of all evil” and the three disciples are taken prisoner.  For his safety, Tripitaka is thrown far away by the Monkey King and he finds himself  in the land of the lizard imps.  Here he meets Meiyan (Choi), who is not exactly gifted in the looks department but she falls instantly in love with Tripitaka and promises to accompany him on his journey to save his friends.  As the two set out, they must face numerous perils if they are to find the resources required to fight back against the evil forces but the most difficult challenge they will face is one that manifests itself in the form of true love.

Looking at the sheer outrageousness of ‘A Chinese Tall Story’, it’s probably fair to say that fans of the original source material may be somewhat disappointed.  Lau’s new take on the proceedings is rooted in a far more up-to-date and almost epic ‘Lord Of The Rings’ style with computer generated effects employed heavily throughout and an emphasis on the wacky and visually stunning rather than sticking to the old school methods.  This approach, despite a few bugbears here and there, does actually work and the film is probably better taken if you ignore it’s influence entirely and sit back to enjoy the ride.  Successfully combining an extremely heartfelt love story with dazzling backdrops and exciting battles,  Lau keeps the film moving at a rip-roaring pace with so many ideas thrown in that it’s certain to appeal to at least one of your senses!

On the acting side of things, Nicholas Tse is an actor who I consider very competent in that stereotypical “young yet naive” role and the character of Tripitaka (an ironically fitting name for such a “trippy” film) is not too far removed from that.  He encompasses his innocence well and the exploration of his feelings of love are certainly demonstrated successfully enough to allow the audience to empathise with him throughout.  Opposite him as the leading lady is Charlene Choi, an actress who has failed to impress me thus far but this film really did show me a whole new side to her.  Gone is the childish and often irritating Spice Girl-type persona that she regularly inhabits as one half of Twins and it is replaced by a very mature performance that is believable, sweet and fun.

When it comes to the action in ‘A Chinese Tall Story’, it pretty much maintains the degree of insanity that is prevalent throughout the movie.  Forget kung fu, this film is about huge flying bug-men, magical weaponry and flaming fireball spells, all of which are created utilising very competent CG effects that are far more believable than previous efforts from Hong Kong such as ‘Storm Riders’ and ‘A Man Called Hero’.  It is worth mentioning though that there is a distinct lack of martial arts employed here which is a shame considering Yuen Kwai was involved but I would imagine that Lau wanted to keep the film as more of an adventure rather than your stereotypical “chop socky”.  This is probably a wise decision as not only does it seem to keep the film more focused on the story but it also allows it to appeal to a more widespread audience.

As for the film’s downfalls, one of the main aspects that I found somewhat disappointing was the film’s interpretation of what is essentially a retelling of the “ugly duckling” tale.  Now don’t get me wrong, I don’t have any specific complaints with the way the story is told as it is a very genuine love story but it’s the disappointing fact that it goes down the route of the typically acceptable Hollywood style of evolution. By this (and don’t panic, I won’t give away any crucial plot points here) I mean that the film still feels compelled to have our ugly heroine go from being beaten with an ugly stick to the picture-perfect Charlene Choi.  Of course, I understand that the audience wants to see her live happily ever after and part of the resolution to her problem lies within a change to her looks but considering the film’s message seems to be that we fall for people as they appear on the inside rather than looks, it’s strange that they still choose to have her become pretty (although I do accept there is a nice twist on the end).

My only other real problem with ‘A Chinese Tall Story’ lies with some of the film’s comedic timing. On the whole, the over-the-top and often insane comedy is employed successfully (that is of course if you are used to Asian humour) but during some of the battles it does border on becoming Looney Tunes-esque.  I understand that this is a film aimed at audiences of all ages but on occasion, I felt it would have been nice to see how our heroes fared in a serious battle rather than relying on a crazy magical fly swatter (just one example) to dispatch with the villains.

‘A Chinese Tall Story’ is definitely not the definitive adaptation of ‘Journey To The West’ (Lau’s ‘A Chinese Odyssey’ series still holds that mantle for me) but it is an excellently constructed side story that utilises the same characters. Lau’s modern interpretation is an extremely wild one that is often mind blowing in its visuals, but in truth it’s the heart warming love story that prevails and makes the film a very entertaining one.