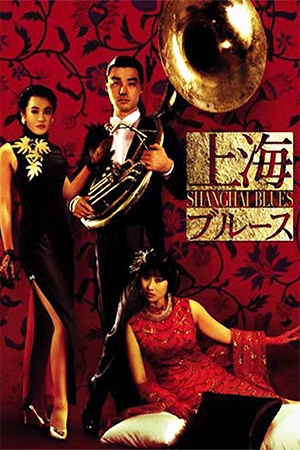 A Tsui Hark film often manages to elicit one or more emotions in the avid viewer. The real joy of the director’s work though is that so many feelings have been encompassed in his various productions. Whether it be art-house excitement in ‘Once Upon A Time In China’ or ‘The Blade’, the tragedy of ‘The Lovers’ or the humour of ‘The Chinese Feast’, Hark is adept at surprising his audience and shifting his focus from film to film. For this reason he remains a director who is, at the very least, offering something better than the average Hong Kong effort. For a portion of its running time, ‘Shanghai Blues’ fits these qualities perfectly as it succeeds in conjuring up the exuberance and energy that the very best MGM musicals could offer. This unfortunately doesn’t remain throughout the 90 minute duration – that is something that will be highlighted later.

On the eve of China’s war against Japan, hapless clown Do-Re-Me (Bee) vows to join the army and defend his country from invasion. As the bombs rain down on Shanghai, he saves the life of a young woman by bundling her under the safety of a bridge. Although the two only spend a few moments together, neither forgets the kindness shown by the other and they agree to meet under the same bridge after the war. At the end of the war Do-Re-Me returns to Shanghai as a musician with his uncle by his side while the mystery woman continues to haunt him. As the moment was fleeting and the surroundings were dark, the pair were unable to see each other properly, therefore making any reunion a perilous affair. Unknown to Do-Re-Me, the woman he continues to dream about is Shu-Shu (Chang) – the feisty dancer in a local nightclub. In one of the film’s many coincidences Do-Re-Me rents the room above Shu-Shu oblivious to her importance. Meanwhile she befriends a cheerful, yet destitute newcomer Stool (Yeh) who lodges at the house as she gets her life sorted out. A series of chance meetings mean that both women fall in love with Do-Re-Me without knowing about the others interest. The stakes are raised when Shu-Shu realises who Do-Re-Me really is and the two agree to stay together no matter what. Loyalty to Stool instead of her personal happiness means that this vow is soon broken and the inevitable chain of events are triggered.

The first half-hour of ‘Shanghai Blues’ has the kind of hypnotic allure that simply envelops the viewer and drags them into this carefully created world. The combination of the colourful visuals and vibrant soundtrack promise the kind of cinematic experience rarely achieved today. From such a punchy opening, it’s sad to report that it doesn’t sustain this magic for much longer and instead gets too bogged down in extreme farce. While some of these farce elements are well-executed and show Tsui Hark’s mettle as a director, the sheer amount of misunderstandings and crossed-wires becomes too wearing to enjoy. ‘Shanghai Blues’ seems like a testing ground for sequences that would later appear in Hark’s more accomplished works; the real skill of combining comedy, action and romance is better displayed in the seminal ‘Peking Opera Blues’ made two years later. These ideas still seem raw, lacking the touch of style that the director would display in the following years. For all the criticisms this is nonetheless an example of Hong Kong cinema looking classy despite a moderate budget. All three leads make sure that the film is endearing even in its slower segments and never becomes a chore to sit through. Importantly, there are a few truly enchanting moments that deserve recognition alone. One particular scene featuring a serenade by Kenny Bee is the kind of breath-taking touch that makes this a recommendation alone.

‘Shanghai Blues’ is, overall, superior entertainment, but by the time the end credits roll its hard not to think of what might have been.