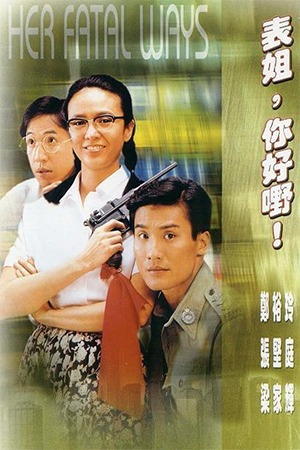 Sister Cheng (Carol Cheng) is a hard-working and ultra-patriotic Mainland Chinese Security Officer who is given the task of taking a wanted criminal back to Hong Kong. Alongside her in this straight-forward assignment is her dim-witted nephew who boasts supposed supernatural powers and offers a degree of assistance. On arriving in Capitalist Hong Kong, Sister Cheng is immediately on the tearing apart this liberal and, in her mind, spoilt society. This antagonistic attitude means that she makes no friends among the Hong Kong police force and creates friction with the case’s investigator (Tony Leung Ka-Fai). To the surprise of both sides though, the prisoner manages to escape and flee from custody, leaving egg on the faces of Hong Kong’s finest. Sister Cheng is told that the event must be successfully resolved before she can return to China – leading to the inevitable joint-investigation that both sides dread. As the case continues so does the general ill feeling between the two new partners who view their work in very different ways. This animosity gradually turns to a begrudging admiration for each other’s contrasting ways as the trail of the escaped convict becomes ever clearer.

Widely seen as Carol Cheng’s finest hour, ‘Her Fatal Ways’ manages to combine a number of qualities to create a very satisfying experience. The stand-out aspect of this is probably the superlative performance of the aforementioned Carol Cheng who succeeds in making Sister Cheng by turns annoying, heroic and vulnerable. All of these characteristics mean that the central persona is engaging and very believable even during the more over-the-top moments. Cheng rightfully earned the Best Actress award at the 1990 Hong Kong film awards for this achievement. ‘Her Fatal Ways’ is also fruitful taken solely as a comedy about difference and the needed for compromise; there are a few hilarious moments and endless other amusing ones that make sure the film hits it’s intended targets. Even the minimal action is surprisingly effective with a couple of nicely directed set-pieces highlighting this. The production isn’t a total triumph though and there are certainly faults that take the shine of the finished piece. Foremost among these is the sometimes repetitive nature of the pacing, something which becomes apparent after the villain evades escape more than once. The humour, although mostly well-polished, does occasionally slip into certain over-the-top moments that are simply unnecessary. These are not major flaws, but they do prevent the film from the possible excellence it very nearly reaches. Nonetheless, ‘Her Fatal Ways’ is a strong recommendation for fans of Hong Kong comedy and even those new to the genre.