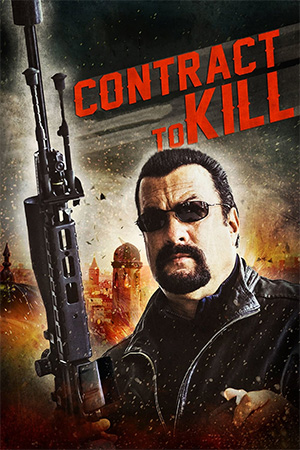 After two migrants affiliated with Al-Qaeda are apprehended in Mexico, the CIA suspects that the terrorist group is working with the Sonora Cartel. They turn to former CIA/DEA enforcer John Harmon (Steven Seagal) for help, and he quickly puts together a team consisting of FBI agent Zara Hayek (Jemma Dallender) and spy-drone pilot Matthew Sharp (Russell Wong). Following some reconnaissance, the group discover that the real plan is to smuggle deadly weapons and terrorist leaders into the US. With the clock ticking, Harmon realises that their only solution is to turn the two parties against one another.

While the synopsis above may sound simple enough, ‘Contract to Kill’ is often anything but easy to understand. This is certainly by no means due to a lack of exposition though, as there’s an absolute boatload of it rattled off in the opening third. Unfortunately, the majority of it is communicated to us via Seagal’s monotone mumblings. This not only makes the film difficult to follow, but it also regularly feels like a complete drain on all of your senses. That being said, I’m not entirely sure it makes all that much of a difference as the plot is really just about Seagal and his team trying to play bad guys off against each other. This basic premise is cobbled together in the most shambolic way possible and is only made worse by the cheesy dialogue, pathetic special effects, and generally poor performances (especially from Seagal). There’s also an overly dramatic score constantly blaring throughout and the less said about that horribly awkward sex scene the better.

If you’re looking for action, ‘Contract to Kill’ does contain a few more fight scenes than some of Seagal’s other recent outings. Sadly, it’s Seagal himself that really drags them down the most. He lumbers around slapping people with minimum effort, sometimes not even bothering to move from his chair, and just constantly looks like he couldn’t care less. The editing does help somewhat, as they employ plenty of ‘Taken’ style quick cuts but it only really bumps up the quality by the tiniest of notches. Outside of the standard slapfests, there are a few weak shootouts, mostly always involving the drone, as well as a couple of opportunities for Wong and Dallender to get in on the action. All in all though, none of it amounts to much that is worth watching.

‘Contract to Kill’ earns an extra half star for the editor’s efforts but the film as a whole is clearly far too broken to ever be fixed. It’s a confusing mess that looks and feels cheap, and there’s not an ounce of fun to be had.